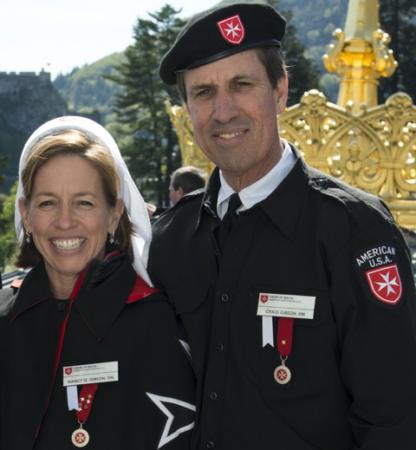 Craig and Nancy Gibson of the Archdiocese of Boston, will co-chair the Order of Malta American Association's pilgrimage to Lourdes, France this month. Pilot photo/ Courtesy Order of Malta

BOSTON -- On April 22, Boston area pilgrims making this May's Order of Malta American Association pilgrimage to Lourdes, France, gathered at St. John's Seminary in Brighton to prepare for the trip. Msgr. James Moroney, rector of the seminary, hosted the Lourdes pilgrimage orientation meeting, which included an opportunity for the pilgrims to meet and greet one another, the celebration of the Liturgy, a presentation by Msgr. Moroney on thoughtful ways to prepare spiritually for the pilgrimage, a panel discussion and a question-and-answer session.

Msgr. Moroney, who is a chaplain in the Order of Malta and making his first trip to Lourdes, said it was inspirational to meet so many of the pilgrims.

"We were delighted to host the pilgrims at St. John's," he said. "I know for some a trip such as this is not easy, and I look forward to sharing part of their spiritual journey with them."

This year, the American Association invited Craig and Nancy Gibson, longtime members of the order who are very active with the Archdiocese of Boston, to co-chair the pilgrimage. The theme this year is "Our Mother Mary, Full of Grace."

Damien DeVasto has been chair of the Boston area of the Order of Malta since 2013.

"Having worked with Craig and Nancy for many years, we knew what a great choice they were to chair the 2017 pilgrimage for the American Association," DeVasto said. "The visit to Lourdes is a wonderful way for our members to further our mission of serving the sick while nurturing their own spiritual wellbeing."

The purpose of the pilgrimage, which takes place from May 3 through 9, is to give people who are ill, known by the French term "malades," the opportunity to experience the healing waters and a range of other spiritual activities that take place during the week. The malades each bring a personal caregiver, and both malade and caregiver travel free of charge. They are accompanied by knights, dames and auxiliary members of the order; medical professionals; and clergy.

Like Msgr. Moroney, many of the clergy are chaplains within the order. This year, five bishops, led by Cardinal Timothy Dolan, archbishop of the Archdiocese of New York, are making the pilgrimage. Members of the clergy are given a variety of formal assignments throughout the week, from celebrating the many Liturgies, including a Mass for the anointing of the sick; leading the eucharistic procession and adoration; facilitating reflection groups; hearing confessions and taking part in other events. They also provide individual spiritual counseling.

Lourdes is where, in 1858, the Blessed Virgin appeared to Bernadette Soubirous, revealing the healing waters. Since then, 69 official miracles have been attributed to bathing in or drinking the water at Lourdes as well as to participating in the eucharistic procession and adoration.

"The pilgrimage provides an opportunity for those of us making this journey to undergo a grace-filled conversion of heart, bringing us closer to God," said Craig Gibson. "While we often are praying for a healing of the body, we also seek a change, a transformation, a healing of the spirit."

Jack Best, 76, a malade making his first pilgrimage to Lourdes, reflects that attitude. A native of Dedham, he now lives on Cape Cod. Jack, who has undergone chemotherapy for cancer, has a blood disease and is going to be immersed in the waters. However, he is also bringing intentions for the wellbeing of members of his family, who have experienced a series of medical and other issues. "I've known about Lourdes and the healing waters for a long time," he said. Asked what his expectations were of the trip, Jack said he didn't have any. "What God wants to give me he will give me. I will follow whatever he wants me to do."

In addition to the St. John's orientation, the pilgrims participated in a conference call April 10 with the Gibsons as well as other leaders from the Boston area. The conference call covered the logistics, from meeting at JFK Airport in New York and boarding the chartered plane to what to expect upon arrival in Lourdes. At the airport each malade, along with his or her caregiver, is assigned to one of seven color-coded teams, each of which includes knights, dames and others.

Throughout the week, the team members serve the malades and caregivers by bringing them to the daily liturgies, the baths, the Marian candlelight procession, the eucharistic procession and adoration and other spiritual events. Some of the malades travel in voitures, single-person carriages that are pushed and/or pulled by the team members.

"Witnessing the strength of these pilgrims, who, despite the challenges of their daily lives, are determined to make the most of what Lourdes has to offer, reminds all of us of our own blessings," said Nancy Gibson.

Sister Rosemary Rese of the Little Sisters of the Poor in Somerville, which provides a home for low-income seniors, is travelling as a caregiver with one of the residents. Margaret, who is in her mid-80s, is coping with the infirmities that come with age, and both she and Sister Rosemary plan to be immersed in the waters. Sister Rosemary has never been to Lourdes but said her 95-year-old mother went 25 years ago and every day prays the prayers she said going into the baths.

"As a Little Sister of the Poor, care giving is a part of my life," Sister Rosemary said. "I'm delighted to be accompanying Margaret as she experiences the graces of Lourdes. We will be surrounded by people from around the world who are all seeking some special grace from Our Lady."

More than 60 pilgrims from the Boston area will be part of the group making the trip from the American Association, bringing the total participants to more than 400 people. While the Boston area has always been well represented, this year's Boston area participation is at an all-time high, almost double the typical turnout.

The American Association is one of three regional associations making up the order of Malta in the United States, and all three associations will be sending pilgrims the same week. A Catholic, worldwide, lay, religious organization, the order's mission is to nurture, witness and protect the faith and to provide assistance to the poor and suffering. It operates in more than 120 countries. This is the 32nd annual pilgrimage to Lourdes for the American Association.