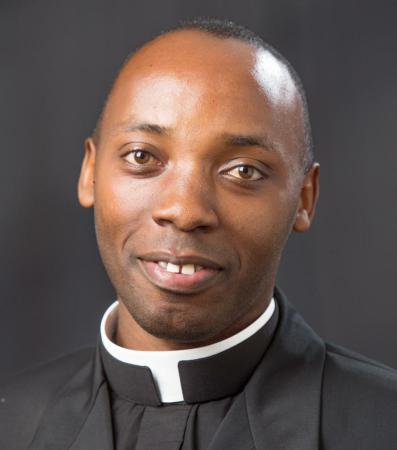 This is the fifth in a series of articles profiling each of the eight men who will be ordained to the priesthood by Cardinal Seán P. O'Malley on May 20.

When Deacon Godfrey Musabe was about 10 years old, he witnessed something that would change his life forever.

"It was 1996. I was a child, in my home town of Fort Portal in Uganda and I attended an ordination of a young priest," Deacon Musabe recounted. "I remember it had to be outside because our church was too small for everyone who wanted to be there, and I also remember the feeling that one day, that was going to be me."

Even as a young child, Deacon Musabe remained very close to his faith. The sixth of seven children, he received Catholic education throughout his life.

For four years he attended St. Mary's Minor Seminary, a school for boys discerning the priesthood. Together with his elder brother, Deacon Musabe then transferred to St. Leo's College, a Catholic boarding high school. After graduating from St. Leo's College, he attended the Uganda Martyrs University, where he majored in social sciences and minored in philosophy.

"By then, I was tired of being a seminarian," he admitted. "I wanted to be a priest, but there were many things pulling me away."

Among those was his desire to build a better home for his parents. Growing up, he and his siblings would often talk about the day when they would be able to provide for their parents, he said.

Trying to realize that dream, Deacon Musabe began his career. Although he was quite successful, he was unsatisfied.

"It really hit me -- I'm working well, making good money, but I felt as though I was throwing away my life. I knew it was time for me to decide," he said.

Deacon Musabe turned to his pastor for advice. After a three-day retreat, he knew God was calling him once again to enter the seminary.

"Because I had met many holy priests from religious orders, I first thought that God might be calling me in that direction," remarked Deacon Musabe.

For one year, he considered joining the Holy Cross Fathers, but then he heard about the Glenmary Home Missioners, a Catholic society of priests and religious whose ministry focuses on rural towns in the United States. In 2011, Deacon Musabe left his family, his comforts and his country and set out to realize his call.

"I remember the day before I left, the enormity of what I was doing dawned on me and I was terrified," he said. "I am the first person in my family to leave Uganda, so it was very hard -- both for me to leave and for my family to watch me go."

For two years, Deacon Musabe attended St. Meinrad Seminary in Indiana -- the seminary where Glenmary Home Missioners priests are formed. After visiting several missions, and speaking with his superiors, Deacon Musabe discerned that although he was not called to be a part of that particular order, he was certain God was calling him to the priesthood.

"How I got to Boston is a bit strange," the 31-year-old said with a smile. "I had visited Boston earlier -- during my two years in Indiana -- and had felt completely drawn to be here. It is hard to explain."

He was accepted to St. John's Seminary in 2013. As soon as he began his studies, he knew he was where he belonged.

Thinking back on the past four years, Deacon Musabe is certain he will miss the fraternity he has experienced, but he is also looking forward to what lies ahead.

"I was very quickly welcomed into this community, and I have truly enjoyed the brotherhood and the genuine concern that we all have for one another," he said, "But I do not think that it will go away. We are brothers, and always shall be."

As his ordination approaches, Deacon Musabe is looking forward to "working and journeying" with people.

"That's the kind of priest I wish to be," he added.