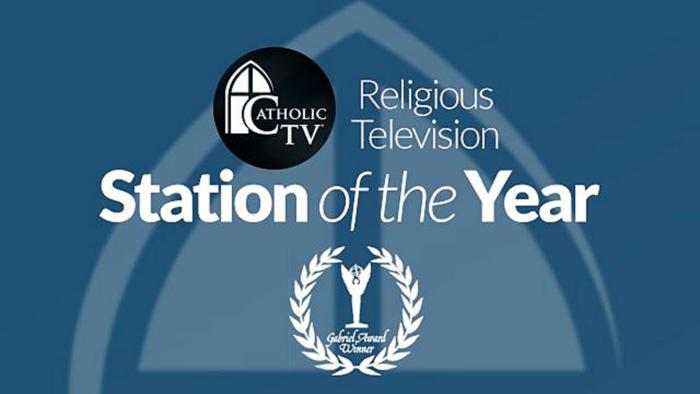 WATERTOWN -- The CatholicTV Network announced this week that it has been named Religious Television Station of the Year in the 52nd annual Gabriel Awards Competition.

The Gabriel Awards, established in 1965 by the Catholic Broadcasters Association, "recognize outstanding artistic achievement in a television or radio program or series which entertains and enriches with a true vision of humanity and a true vision of life." This year marks the third time CatholicTV has won in the Religious Television Station of the Year category.

"Winning the Gabriel Award for Station of the Year is not only a reflection on the wonderful and professional work of the entire staff of the CatholicTV Network, but also on the dedication of all the viewers who have supported the station's efforts over the years and made it possible to bring the message and love of Jesus into the homes of millions of people," said Jay Fadden, executive vice president and general manager of CatholicTV.

Bishop Robert Reed, president of CatholicTV, also expressed his gratitude, saying, "It is a tremendous honor for us to be granted this prestigious Gabriel Award, not for a specific program, but rather for our entire network. I hold in deep esteem our team members and on-air personalities as well as the entire CatholicTV family of viewers who have sustained the network for over 60 years. This Gabriel Award is a tribute to their dedication and commitment to America's Catholic Television Network."

With this win, CatholicTV joins the Canadian Broadcasting Corporation, CBS, and other networks as 2017 winners. Also honored this year with a Gabriel Award is Boston television station WCVB, which was awarded Secular Station of the Year.