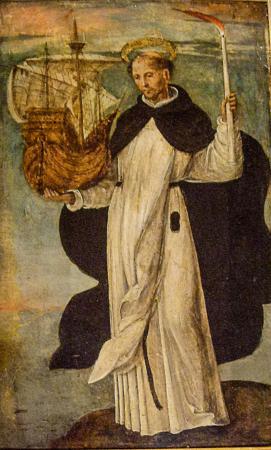 An image of Blessed Peter Gonzalez Telmo from an altarpiece in Seville, Spain. Wikipedia photo

Since the earliest days of the Church, relics of martyrs and saints have been venerated by the faithful. In keeping with this tradition, to this day Catholic Churches around the world all have a relic enshrined in or under the altar before the church building is dedicated and its altar is consecrated.

The relic that will be placed inside the main altar of the Our Lady of Good Voyage Seaport Shrine when it is consecrated on April 22 is a bone of Blessed Peter Gonzalez Telmo, OP, a Dominican friar and priest whose ministry focused on sailors and their families.

Born in the late 12th century to a Spanish noble family with roots in the monarchy, Blessed Peter entered the priesthood, following in the footsteps of his uncle, Bishop Tello Tellez de Meneses. His uncle, who was also his bishop, quickly appointed Blessed Peter as rector of the cathedral in his hometown in northwest Spain, Palencia.

Known as a very worldly, vain priest who loved the trappings of wealth, Blessed Peter underwent a conversion one Christmas morning. While riding his horse in a lavish procession as he was to take up his position at the cathedral, the horse threw him into a heap of mud and refuse. As the townspeople looked on and laughed, Blessed Peter realized that his love for the world had been misguided.

Reevaluating his life, he left his life of comfort and entered the Order of Preachers, or Dominican Order, a mendicant order that focused on preaching the word of God and serving the poor. For the rest of his life, Blessed Peter preached and ministered to sailors and their families throughout the coastlands of Spain and Portugal.

After his death in 1246, many sailors have invoked his name during storms at sea. Because of the many accounts of the seas calming after sailors prayed for his intercession, Blessed Peter Gonzalez Telmo, OP is considered the patron of Portguese and Spanish sailors and is often depicted holding a caravelle ship in his hands. His feast day is April 14.

"What's very interesting is that for centuries the reliquary of Blessed Peter has been closed," noted Father Jonathan Gaspar, priest secretary to Cardinal Seán P. O'Malley and Director of the Office of Divine Worship for the Archdiocese of Boston, "but they have agreed to open it and give us a relic for our chapel."