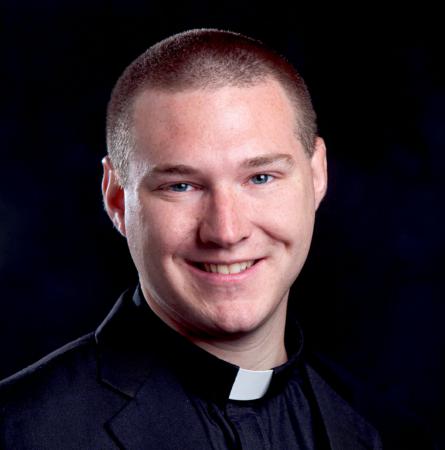 This is the fourth in a series of articles profiling each of the eight men who will be ordained to the priesthood by Cardinal Seán P. O'Malley on May 20.

This is the case with Deacon Kevin Leaver. Raised in Stoughton, the oldest of three children, Deacon Leaver never fully believed in the existence of God. He was raised Catholic, attended religious education classes, received his sacraments, but he wasn't fully convinced -- until tragedy struck.

"The summer of 1998, as I was entering 8th grade, my father had a massive heart attack. At the time, I did not believe in God, or so I claimed not to believe in God," he explained. However, as his mother rushed his father to the hospital, Deacon Leaver's first instinct was to pray for his father.

"Immediately I felt this sense of peace and calmness," he recalled. His father survived the heart attack, and the subsequent heart surgery, but that experience of prayer and peace remained with him.

One year later, his parish, Immaculate Conception in Stoughton, launched the Life Teen program. Although at first Deacon Leaver attended the parish's Life Teen Mass, he wasn't a regular in the program.

The following year, however, a friend "challenged" him to participate in Life Teen, he said. After seven months of insistence, Deacon Leaver finally gave in.

It changed his entire perspective on faith, Catholicism and God.

"I experienced the Holy Spirit in a profound way that night," Deacon Leaver said. "I kept attending the Life Teen Mass and LIFE nights, and learning more about the Catholic faith and growing in my own personal relationship with the Lord," he said.

Deacon Leaver also attributes his discerning the call to become a priest to his Life Teen experience. In July 2002, he attended World Youth Day in Toronto, Canada with a Life Teen group from his parish.

"This was the first time I can remember ever honestly thinking about the priesthood, and it was all because of (that friend's initial) invitation to Mass," he mused. "The friend in 9th grade that persistently invited me to Mass did more for my faith life that I think she knows."

However, Deacon Leaver didn't immediately enter the seminary. He graduated from Stoughton High School, majored in Spanish at Bridgewater State, and went on to become a high school Spanish teacher.

During his third year of teaching, Deacon Leaver began to seriously consider the call to the priesthood. At first, he wondered whether he was called to the religious life, but ultimately realized he was called to serve the Church as a diocesan priest. In June 2011, Deacon Leaver was accepted to study at St. John's Seminary in Brighton.

"When I first told my parents I was discerning, they were taken aback," he said. "As the oldest, I think they had envisioned me dating, marrying and beginning a family, yet I was talking about going back to school for 6 more years and giving up the possibility of ever having my own biological family by becoming a celibate!" he said.

Over the past six years, though, his parents' view of his vocation has radically changed. "Throughout my time in seminary, their hearts have been bursting with pride as they walk this formation journey with me," Deacon Leaver stated.

As his second year of pre-theology at St. John's Seminary was about to begin, Deacon Leaver received an email one evening from rector Msgr. James Moroney requesting to speak with him the following day.

"I said to my sister, 'I hope he doesn't ask me to study in Rome!'" he recalled.

That is exactly what his rector had in mind.

Msgr. Moroney "said that I had been invited on behalf of Cardinal Seán (O'Malley) to do my theological studies at the Pontifical North American College in Rome," he said.

Although at first Deacon Leaver wasn't very excited to leave the country -- he had never lived outside Massachusetts -- he accepted to study at the North American College.

"My first year in Rome was a very difficult period of transition," he said. Making new friends, learning a new language, adapting to a new formation program -- all seemed a bit daunting to him.

But, by the time he began his second year studying in Rome, Deacon Leaver began to see things differently.

"I feel that studying in Rome has been an incredible blessing, not only in my priestly formation, but in my personal life as a disciple," he said. "For the past four years, I have lived in the heart of the Church...I have had the blessing of being in the presence of the successor of Peter...I could never accurately express in words just how great of a blessing it has been for me."

"I am deeply grateful to the cardinal as well as to Msgr. Moroney, not only for having invited me to study in Rome, but for supporting me through their prayers during this period of my formation," he added.

Although Deacon Leaver will be ordained to the priesthood in May, he will return to Rome for a final year of priestly formation, as is the practice of those who study at the North American College.

And although there are many changes and challenges ahead, there is one thing Deacon Leaver is sure of.

"My formation in Rome and the opportunities afforded me here will enrich my priestly life upon my return to Boston in the summer of 2018," he said.