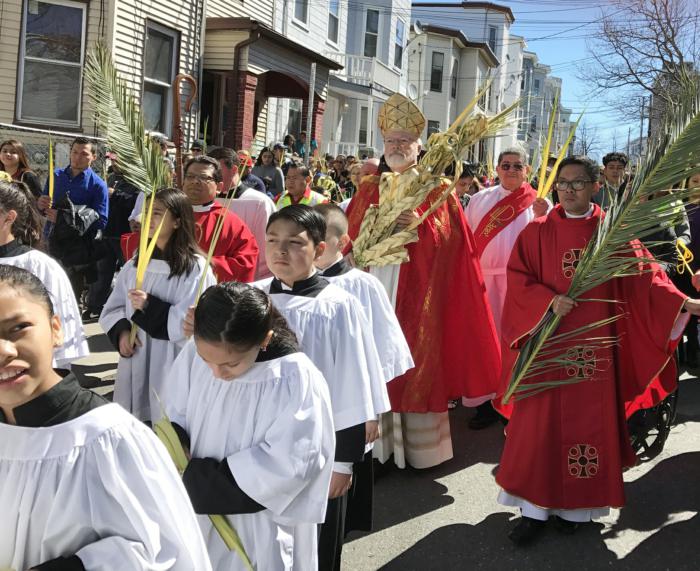 'I always like to join a local parish for the celebration of Palm Sunday, and this year I was invited to celebrate with St. Rose of Lima Parish in Chelsea.' Pilot photo/CardinalSeansBlog.org

That evening (4/7), I was very happy to attend A Future in Bloom Dinner Gala to benefit Franciscan Children's Hospital.

Franciscan Children's was founded in the late 1930s by Cardinal Cushing with the help of Joseph and Rose Kennedy, and was staffed and administered for many years by the Franciscan Missionaries of Mary. Today, the hospital serves about 16,000 children each year.

During this year's dinner, they made a very strong presentation explaining the care they give to children suffering from mental illness, which I found very compelling.

In our society, and even in our Church, we don't do enough for those who suffer from mental illness. Unfortunately, there is such a stigma in society that sometimes, rather than seeing this as a disease and something that needs to be cured or cared for, instead there is often fear, anxiety and even prejudice around mental illness. They emphasized the fact that the highest cause of death among teenagers is suicide. They told us that, while statistics for other afflictions have changed over the years because of advancements in science etc., sadly the statistics on suicide have remained constant.

I was very pleased to see how Franciscan Children's is stepping up to the plate to meet these needs for young people.

This is just one of the ways in which the work of Franciscan Children's is so important. We are so grateful to John Nash and all the staff who keep the spirit of the Franciscan Sisters alive there, and also to all those who participated in the evening to make it such a successful event.

Saturday (4/8), I was visited at the Cathedral by the newly elected members of the leadership of the Ugandan Catholic Community in the archdiocese. We had a wonderful dialogue about their ministry and current immigration issues and, following our meeting, they joined me for the celebration of Vespers in the Cathedral.

We are very grateful to Father Michael Nolan and the people of St. Mary Parish in Waltham for doing so much to make the Ugandan Catholic community feel at home in that parish.

I always like to join a local parish for the celebration of Palm Sunday, and this year I was invited to celebrate with St. Rose of Lima Parish in Chelsea. We had the blessing of the palms about a mile from the church and then the procession through the streets of Chelsea.

They had people dressed as the apostles and disciples and they had a man portraying Jesus, who rode a donkey (which I think was more like a pony or a small horse.) It was so loud and the people were so enthusiastic that I actually worried that the poor animal would bolt and we would see Jesus clinging to his back for dear life as he sprinted through the streets of Chelsea! But, thank God, that didn't happen, and it was a grand procession with just a huge crowd of people.

Following the procession we celebrated the Mass at the church, which was concelebrated by Father Hilario Sanez, Father Martin Tran Van Ban and Father Reynaldo Escobar. Also with us on the altar were some deacons and our seminarian from the parish, Fernando Ayala, who is studying at Our Lady of Providence Seminary. We were also joined by a number of religious sisters from a number of communities. It was just a beautiful celebration and I was so happy to have been a part of it.