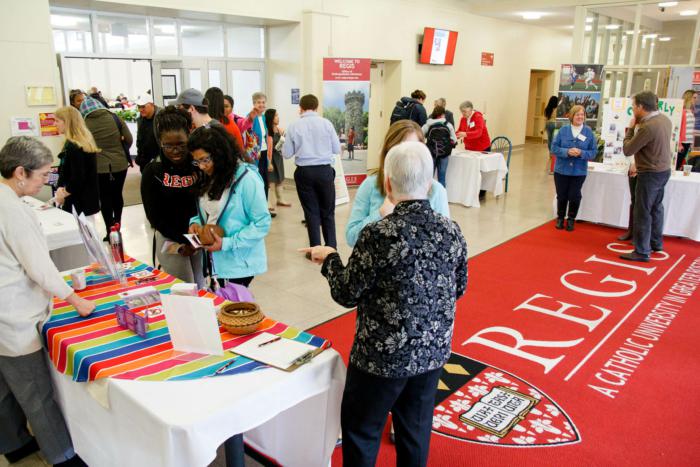 WESTON -- There was laughter and excited chatter around Regis College's dining hall in the upper student center, April 4, but it wasn't just coming from hungry students.

Just outside the dining hall, a number of religious sisters spoke enthusiastically amongst themselves and to students and faculty, handing out pamphlets and cards detailing some of the various ministries religious women from around the Archdiocese of Boston are involved with during a special "meet and greet" session.

The session, along with a subsequent forum, were meant to serve as a way for students to become better acquainted with the work local sisters do on a daily basis. It was originally planned for March 14, during National Catholic Sisters Week, but adverse weather led the event to be postponed until April.

Dozens of students and faculty members stopped to greet and speak with the sisters on their way to or from lunch, and dozens attended the forum, moderated by Mary Lou Jackson of the president's office.

During the forum, representatives from each ministry detailed their work and the impact it has on those the ministries serve, as well as the larger community.

Mary Rita Weschler, CSJA and Priscilla Kelso spoke about The Women's Table, a ministry that provides a variety of services specifically for women.

Since 2008, said Weschler, director of the ministry, The Women's Table has provided "provide individual advocacy for women, connecting women to services or resources that they might need."

Those services include monthly circles of support for women that share common experiences, such as mothers of children with special needs or women who share a multicultural background, as well as a number of enrichment programs, including a writing workshop.

Kelso, who started the monthly multicultural circle, noted that it allows women, "particularly those who have been transplanted from other cultures, to get together once a month and be ourselves in a safe place in the Sisters of St. Joseph House in Brighton."

"We get together because we need a safe place to think out loud, to feel out loud, to be honest about our struggles, our joys and our sorrows, as people who are trying to compose a life" in another land, she said.

All of the services offered by The Women's Table, Weschler noted, are "really for encouraging people to think more deeply about their lives" and their faith.

The Literacy Connection, said Sister Pat Andrews, CSJ, director of the ministry for the last 17 years, has been operating since May of 1987, and originally began to "reach out to Southeast Asian immigrants who had settled in or around the Brighton/Allston area" and assist them with English literacy.

The ministry has expanded since then, with students now coming from over 30 different countries. A citizenship program has also been added, and Sister Pat noted that since 2005 a total of 138 students who have utilized the program have since obtained U.S. citizenship.

Currently, there are over 130 students involved with the ministry and 60 tutors, with "a good 25 of them" being religious sisters, said Sister Pat.

Breda Bosch, a young staff member with Casserly House, spoke about the educational and support services Casserly House offers the community of Roslindale.

Founded 17 years ago, Casserly House offers a variety of programs for underprivileged and multicultural members of the community, including an after-school program and an educational summer camp for schoolchildren, as well as adult education classes.

Casserly House also provides immigrants assistance in studying for citizenship tests and the application process, and Bosch said there are six people currently studying for the test with the help of the ministry.

"Especially in light of our current political situation, our motivation to remain a safe and welcoming space for the immigrants is more apparent than ever," she said.

She noted that "since 2000, when the sisters moved in, the neighborhood has visibly changed" in a positive way.

The community "has truly come together under the presence of the CSJ," said Bosch.

The Bakhita House provides emotional and physical support, food, shelter, and clothing to women who have been victims of human trafficking.

Founded through efforts by the Boston Unit of the Leadership Conference of Women Religious, a total of 45 women have been assisted since its opening in 2011.

"Our purpose at Bakhita house is to provide a safe and loving home for the women who come to us," said Sister of Charity of Halifax Sally McLaughlin.

The house contains space for three women at a time, she said, and "we help the women to access the services that they need -- physical and mental health, counseling, education, or drug treatment."

There is a total of 21 congregations of religious sisters in the Greater Boston area who support the house, and it is through that collaboration that "we were able to do something no single congregation could have done its own."

"It's a wonderful gift that we have as Catholic sisters to reconnect with each other and to support each other, sharing the same faith, the same trust in God's providence, the same desire to show God's love to anybody who needs it," she said.

Following the forum, students were able to ask the sisters questions.

Lauren Mercer, a junior a Regis in the education program, told The Pilot that "seeing what the sisters have all done is really great."

She said that a number of her professors are sisters, and they are shaping the way she looks at education.

"It's very clear that the 'dear neighbor' is so important to these sisters, and I think that it really shapes the way that all of us in the education program look at education and how much we can do to change everything," she said.

Sister Pat, speaking after the forum, said seeing young people take such an interest in work of the sisters gives her hope.