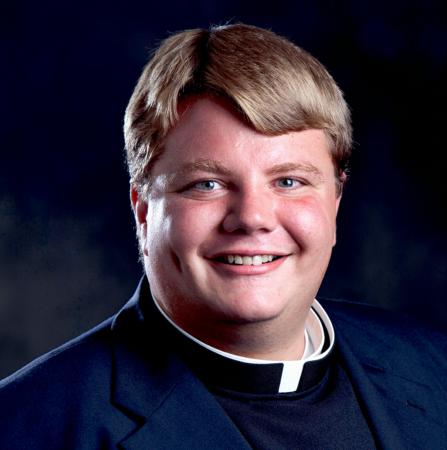 This is the third in a series of articles profiling each of the eight men who will be ordained to the priesthood by Cardinal Seán P. O'Malley on May 20.

Deacon Jason Giombetti grew up with a profound knowledge of God's unconditional love.

"When I was very young, my mother sat me down and said, 'There is nothing you could ever do that could make your father or I not love you,'" he recalled. "This example of unconditional love really shaped me -- made me understand as a young boy what God's love really meant."

Growing up as an only child, Deacon Giombetti was always very involved at St. Cecilia Church in Ashland, his childhood parish. As a little boy, he would often attend Mass with his grandmother, memories he cherishes to this day.

"When I was in the first grade," he recalled, "I was at Mass and I looked at the priest and then at my mother and said, 'I want to be a priest when I grow up.' That was the first time I remember thinking about the priesthood, but then again, I was only six or seven, so I don't think anyone took it seriously."

"I know my parents wanted me to be happy," he mused, "but they were a bit hesitant at first at the thought of me becoming a priest because they were afraid it would be a lonely life for me, especially after they were gone."

Deacon Giombetti attended Dean College for two years, and then transferred to Suffolk University. Upon graduation, he worked as a director of Religious Education in his home parish, and then at St. Patrick Church in Natick.

Although Deacon Giombetti acknowledged that he was very happy as a DRE, developing relationships with many families and working with children, the call to the priesthood persisted. At the age of 27, Deacon Giombetti entered St. John's Seminary, with the blessing of his parents.

"They also saw that God was calling me, and in the end, they too wanted me to be happy," he said.

And happy he certainly has been.

"I've seen in my own life, that when you do what God is calling you to do, you are given the graces to be so happy," he said with a smile. Deacon Giombetti also noted that he has been "blessed" to get to know certain priests, such as Father Jeremy St. Martin and Father Paul Clifford who "provide examples of what it means to be a happy priest."

"That's the kind of priest I want to be," the 33-year-old said. "I want to work with people to help them connect deeper with God -- primarily through the sacraments, but in other ways too -- and to show that the priesthood is not a lonely life, but a very full and rich life."

Deacon Giombetti believes that being a happy priest is necessary to show to the world that the message of Christ is the Truth, he said.

"This culture really isn't friendly to the whole of Christ's message," he said. "There is a real crisis of faith, but if in the midst of that you see a person who is happy with God alone, it makes people stop and think."

For Deacon Giombetti, looking forward to his ordination also means saying goodbye to his time as St. John's Seminary.

"Six years of education is a long time," he said thoughtfully. "I think, ironically, I am most going to miss the academics -- to take a concept, learn it and pray about it -- I am really going to miss that."

He also added that he will miss the "camaraderie" shared among the seminarians and the faculty. "All of us are here more or less for the same exact reason: to bring Christ's message to the world," he stated, adding that there is "a big challenge" in bringing that message to today's society.