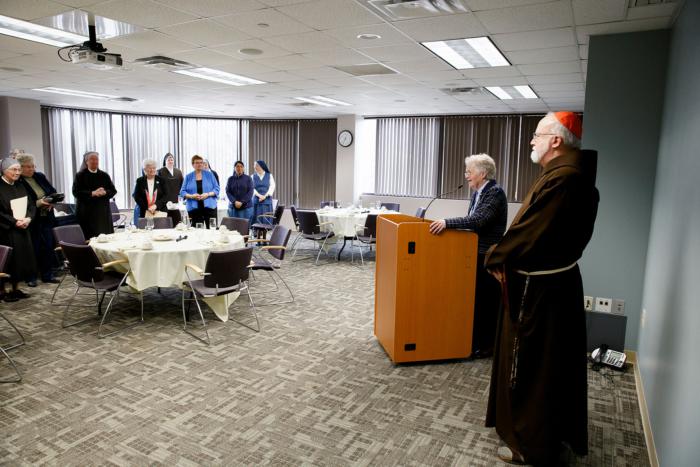 'Wednesday, we had our annual gathering with the major superiors of women religious orders in the archdiocese for a lunch and a time of dialogue.' Pilot photo/CardinalSeansBlog.org

Last Saturday (4/2), I went to Fordham University, where I was invited to celebrate one of a series of special Masses held to celebrate the university's 175th anniversary.

Fordham is one of the largest and oldest Catholic universities in the country. It was originally founded in 1841 by the first Archbishop of New York, Archbishop John Hughes as St. John's College. Originally, the seminary of the Archdiocese of New York was located within the University.

Archbishop Hughes was bishop at a very difficult time in the history of the Church in New York City, a time of great immigration and anti-Catholic Nativist opposition. He was a very forceful character and, in fact, he was often referred to as "Dagger John."

Shortly after he founded the university, he turned it over to the care of the Jesuits who have led the university ever since. Father Joseph McShane, S.J. is the president of the university and concelebrated Mass with me along with a number of Jesuits from the community there.

The chapel is one of the school's first buildings and the altar there was originally at St. Patrick's Cathedral.

I was so pleased that I was able to see Dan Negrea and his family at the Mass. They are close friends of mine -- I celebrated their wedding and baptized all of their children, and now two of those children are students at Fordham.

Wednesday (4/5), we had our annual gathering with the major superiors of women religious orders in the archdiocese for a lunch and a time of dialogue.

This year, the sisters heard a presentation by Father Bryan Hehir on Pope Francis's pontificate, particularly his priorities on immigration issues.

That evening, we held one of our regular board meetings of Pope St. John XIII National Seminary in Weston.

Father Brian Kiely is celebrating his first anniversary as rector and we heard reports of all the good work going on in the seminary. We were also very pleased to learn that Bishop-elect Roy Campbell, an alumnus of Pope St. John XXIII, had just been named an auxiliary Bishop in Washington, D.C.

Also at this meeting, we had an opportunity to acknowledge Tom Reilly, who is leaving the board after 20 years of service. We are very grateful for all his hard work and support.

Bishops of the Boston province

Thursday (4/6) we had our semi-annual meeting of the bishops of the Boston Province -- which includes the dioceses of Massachusetts, Maine, Vermont and New Hampshire -- at which we come together to discuss issues of common interest. It's also a great moment of fraternity for the bishops.

We were so pleased that all the bishops of the region were able to be at the Pastoral Center with us, as well as several retired bishops.

It's always an opportunity to be with the bishops and hear about what's happening in the different dioceses and facilitate our working together more closely in the region.