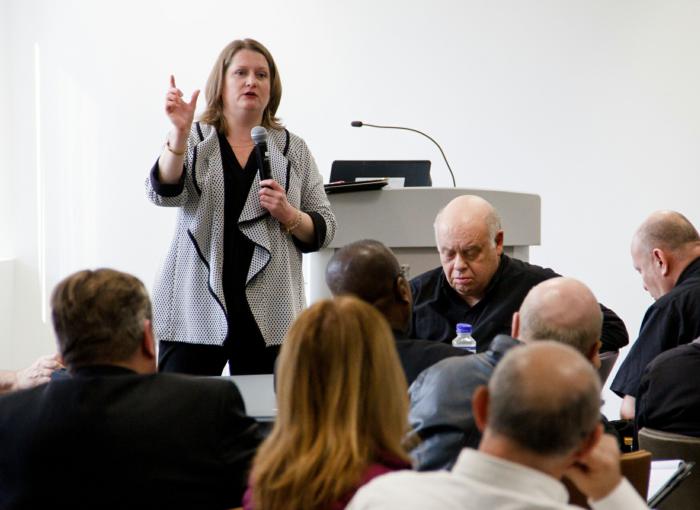 The presentation was largely led by Catholic Charities' director of Refugee and Immigration Services Marjean Perhot, who detailed the administration's three orders pertaining to refugees and immigration and offered advice to pastors on how to handle the new orders.

Father Bryan Hehir, cabinet secretary for Health and Social Services of the archdiocese, served as moderator during the presentation, fielding questions from the number of priests gathered there and offering words of welcome.

With the help of informational slides, Perhot spoke about the executive orders on border security and enforcement, on interior enforcement, and on refugees and travelers. She noted that the first two orders put an emphasis on preventing undocumented immigrants from entering the U.S. and deporting those already in the country.

The third, currently blocked by federal courts, would see the number of refugees able to be resettled in the country drastically lowered, and the implementation of a travel ban that would block people from certain countries from entering the U.S. for a set number of days.

Perhot also explained the differences between a refugee and an immigrant.

A refugee, she said, is a "person of special humanitarian concern to the U.S. government."

"The person has been vetted -- 12 to 15 background checks -- before entering the United States," and typically that person has been living outside his or her country of origin in a refugee camp or a type of urban ghetto for years, Perhot said.

Only a limited amount of refugees may be admitted each year (the new executive order on refugees reduced the number of arrivals from 110,000 to 50,000 for 2017) and refugees must be able to prove at least one of five grounds of persecution: race, religion, nationality, membership in a particular social group, and political opinion.

"It's very hard to make this case," Perhot said, but once a refugee enters, he or she is admitted legally and indefinitely.

These stipulations do not apply to immigrants, who may enter the country in one of three ways: as a non-immigrant, as an undocumented immigrant, or as a lawful permanent resident.

A non-immigrant is a person who typically enters into the country with a temporary visa, such as the temporary visas granted for study or work. Failing to leave before the time limit on the visa is up will result in a person becoming "out of status," leaving that person to "accrue unlawful presence," said Perhot.

"This is where a lot of people get mixed up," she said.

Undocumented immigrants and those "out of status" are technically subject to deportations, and in her presentation Perhot spoke about some of the locations U.S. Immigration and Customs Enforcement (ICE) agents are generally dissuaded from entering.

According to a 2011 Department of Homeland Security memo, hospitals, schools, places of worships, funerals, weddings, and demonstrations are all deemed "sensitive locations," or areas where immigration enforcement actions are not typically carried out, except under special circumstances.

Perhot said Catholic Charities has been monitoring reports of ICE agents operating within the archdiocese, and has been responding to them accordingly. Just last week, she said, the organization heard of possible agents in Brockton, so it prepped staff members and worked to reassure the community. That monitoring is ongoing.

She also spoke about the Know Your Rights presentations Catholic Charities has been holding across the Archdiocese of Boston, which have been used to inform immigrants on their legal rights, regardless of status, and on the many immigration legal services the organization offers to the public.

Right now, said Perhot, as "we're one of the only non-profits in the whole Eastern Mass doing this work," she said, noting that Catholic Charities receives hundreds of phone calls for their services but ultimately is only able to take eight to 10 applicants a week.

The organization is looking to change that, however, through a new fundraising effort with the Combined Jewish Philanthropies.

Debbie Rambo, president and CEO of Catholic Charities of the Archdiocese of Boston, who was also at the presentation, noted that through the fundraising, "we are hoping that in the next few months that we will have enough money to add to our legal team so that five minute phone call on Monday morning will allow us to see many, many more people."

(This is a corrected version of the story orginally posted April 7. The original story incorrectly stated the reduction in the number of refguees allowed under the new executive order.)