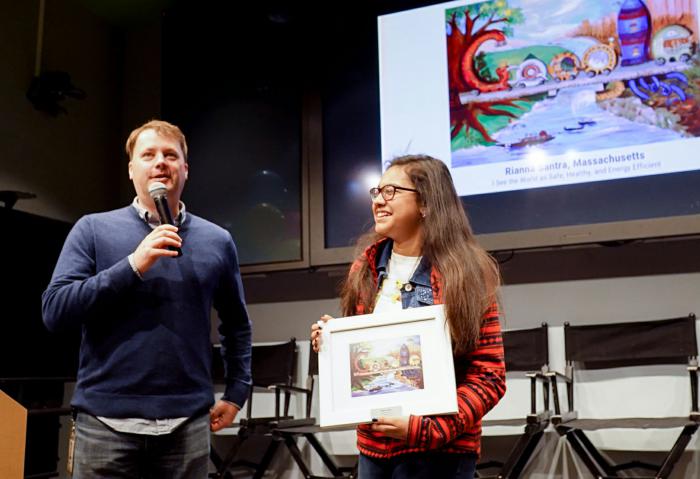 TYNGSBORO -- The 2016-2017 Doodle4Google competition officially came to a close March 31, but not before 5th-grader Rianna Santra, a student at the Academy of Notre Dame in Tyngsboro, was named one of four national finalists.

Santra was named one of 53 state finalists back in February in the Doodle4Google competition, a national contest that encourages young artists to create a special logo or "doodle" for the Google search homepage. In this year's contest students were challenged to create an environmentally-positive doodle and message on the theme "What I See for the Future...."

"I'm really happy and excited, and if I win then I'm going to get even more excited," the 11-year-old told The Pilot in February, after being named a state finalist.

While she wasn't the competition winner, as a national finalist she was flown out to Google's headquarters in California and received a $5,000 college scholarship and a Google Chromebook. As a state finalist, she had already received an Android tablet.

Cindy Boynton, director of Marketing and Communications at the Academy of Notre Dame, told The Pilot April 4 that she had been touch with Santra's father, Prosenjit Santra, who said the family flew out to California on March 30.

They were told that competition had seen 130,000 entrants from across the country, and Santra was among the top five.

At the headquarters, Santra had the opportunity to meet Google team members and see a demonstration of a new Google software project, as well as participate in a Q and A session with a NASA representative.

In a statement, Elizabeth O'Connell, principal of the Academy of Notre Dame's Lower School, said she is impressed with the "initiative and artistic ability that Rianna demonstrated by entering the contest."

"The fact that her vision for the future, as depicted in her artwork, was honored on a national level makes all of us here at the Academy of Notre Dame very proud," she continued.

"We are certain that Rianna, and other students like her who share a passion for making this world more sustainable, will pave the way for a healthier future for all of us."