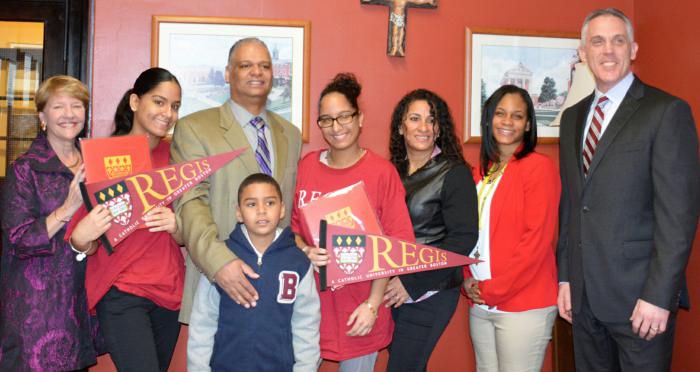 DORCHESTER -- The president of Regis, a Catholic university in Weston, gave twin sisters a double surprise recently by presenting each of them with a full scholarship to the university, March 15.

It was a typical Wednesday morning when the twins, Emely and Evelyn Nunez, were called to the principal's office at Cristo Rey Boston High School in Dorchester. The two honors students cautiously walked into the office where they were greeted by news cameras and a room full of people. The suspense was lifted when Regis President Antoinette Hays, PhD, RN, presented Emely and Evelyn with their acceptance letters to Regis and the prestigious Presidential Catholic Scholarship.

"Regis typically gives out only one scholarship at each school to a deserving student but we couldn't choose between the two of them, so we decided to give it to both of them," said Hays.

Emely has a 4.02 GPA and is ranked among the top 5 students in her class. She is a member of the National Honor Society, plays basketball, volunteers at the Boys and Girls Club of Dorchester, distributes lunches for the homeless, organizes food drives, and interns at Sullivan and McLaughlin Companies.

Evelyn Nunez has a 3.93 GPA. She is also a member of the National Honor Society, plays basketball and softball, volunteers at the Boys and Girls Club, has participated in service trips, distributes lunches for the homeless, organizes food drives, and interns at O'Neill and Associates.

They both live in Dorchester with their mother, Ingrid, a housekeeper, and their father, Ramon, who is a campus police officer at Suffolk University.

Evelyn and Emely thanked their parents for everything they have sacrificed throughout the years.

"One day I'll be the one helping you guys and all the stress will be lifted off your shoulders," said Evelyn.