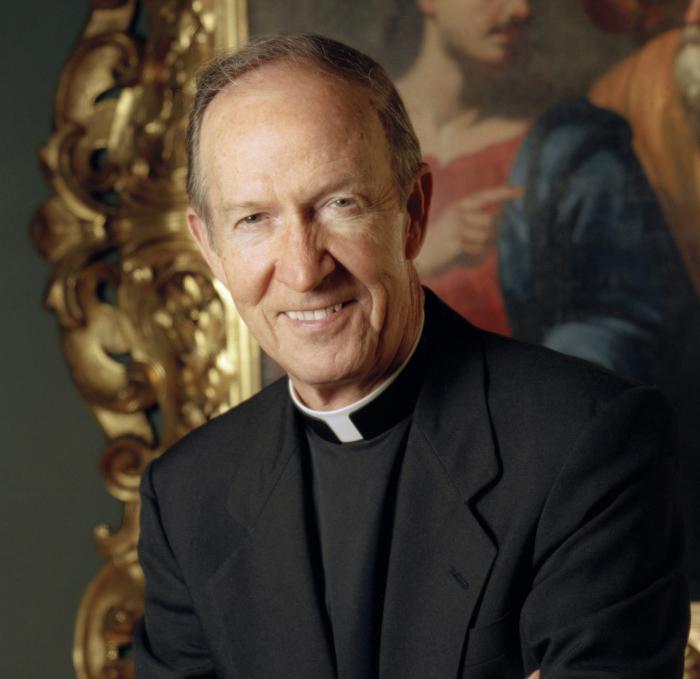 For nearly a quarter century his name was synonymous with Boston College. By all accounts he saved what was a floundering, commuter, predominantly men's school and transfigured it into a major research university with a dynamic student body and an expansive athletic program.

He seemed unlikely presidential timber. Trained as a philosopher in the long Jesuit tradition of rigorous academic formation. But he proved to be every bit the do-er as he was the thinker.

Born in Blasdell, N.Y. on Dec. 31, 1924, James Donald Monan was a son of the late Edward and Mary (Ward) Monan; he had two siblings, both deceased: Edward and Gertrude Cheeley. He attended the Jesuit's Canisius High School in Buffalo and entered the New York Province of the Society of Jesus on Sept. 7, 1942, studying at St. Andrew on the Hudson, N.Y.; University of Louvain, Belgium from which he received his doctorate in philosophy. Ordained a priest on June 18, 1955, he taught at LeMoyne, the Jesuit college in Syracuse, N.Y., and from there as its then vice president he was named as the 24th president of Boston College.

Arriving on the Heights in the summer of 1972 to assume the presidency, he found problems which surely seemed both daunting and endless. Enrollment, finances, physical plant, fiscal problems and more were his regular, even daily, concerns.

Taking his cue from the school's motto "Ever to Excel" he started challenging past ideas with a new vision for Boston College. He involved alumni in governance and development; he saw value in a high profile athletic program and had an important ally in the late William Flynn, the college's legendary athletic director.

Recruiting wasn't only in athletics; he initiated an aggressive recruitment strategy to bring faculty in all departments who were both excellent teachers and excellent researchers; raising the image of the college among the academic community, both nationally and internationally.

He would have admitted that he was greatly aided during the early '80s as the profile of the school grew with exposure provided by Doug Flutie and his teammates on the Gridiron. Home or away Father Monan was a fan and a presence. It was not unusual to see him at several athletic events a day, when he wasn't on the road expanding the horizons of the college, which by then had truly become a university. His northern New York roots showed as he appeared on the ice at both old McHugh and Kelly Rink at Conte Forum, one of the signature buildings that rose on campus during his tenure. He earned a nickname "Skates Monan" not only for his appearances but also because of his skating ability.

Blessed with a vision and a view of life and the world that was truly big picture, in no small part because of his philosophy training, his stamina and determination would prove to be the life savers for Boston College. He probably would have demurred about having such accolades piled on, but it is impossible not to see the truth that in fact he saved Boston College and provided the leadership that brought BC, literally from the precipice of extinction to the heights of distinction.

Unassuming and gregarious, he roamed the campus and spoke with students as easily and as readily as he could engage faculty in debate or fellow philosophers in thinking. He seemed to have that important knack for finding the right person and getting the fit with the right position.

He greatly increased the number of women on campus on both sides of the desks, as well as in key administrative positions. With the expansion of BC's revived and here to stay image, he also expanded the entire student body to include students from all 50 states and at least as many other nations.

Conscious of the Jesuits' call for their students on any level of education to be "men and women for others" he expanded opportunities for service, like Jesuit Volunteers Corps, as well as spreading Jesuit faculty members who resided in dormitories and were virtually chaplains for the dorms where they resided.

When he knew it was time to leave as president he did so with an immense grace, but surely with a great sense of his accomplishments; he certainly left with the gratitude of thousands of alumni.

In retirement, he served as chancellor of Boston College, the first ever to hold that position; he remained in residence with fellow Jesuits at St. Mary Hall on the Chestnut Hill Campus until just recently when he moved to the Jesuit Retirement facility, Campion Hall, in Weston. He died there on March 18.

Father Monan's Funeral Mass was celebrated at St. Ignatius Loyola Church, Newton on March 22. The principal celebrant was Father Robert L. Keane, SJ, rector of the Jesuit Community at Boston College; and the homilist was Father Joseph M. O'Keefe, SJ, rector of the Jesuit Community at Fordham University and former Dean of the Lynch School of Education at BC. Following the Funeral Mass, Father Monan was buried in the Jesuit Cemetery, Weston.