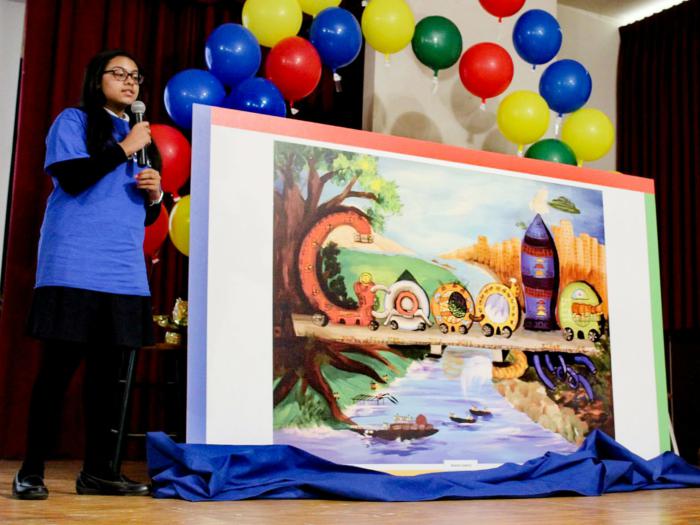 TYNGSBORO -- For 5th-grader Rianna Santra, competing in the national Doodle4Google competition isn't just about winning the many prizes that comes from being a finalist or a national winner, but it's also about changing the world.

A student at the Academy of Notre Dame in Tyngsboro, Santra entered the Doodle4Google competition, a national contest that encourages young artists to create a special logo for the Google search homepage, late last year and was selected to be one of only 53 state and territory finalists.

Keeping with this year's theme of "What I See for the Future...," Santra's doodle depicts a future in which there is a "mobile food producer that generates multiple cells from one cell, clean water produced from air, reusable metal made from garbage and a mobile hospital for emergencies" that will make the planet "safe and healthy," reads her description of her artwork on the Doodle4Google website.

"I See the World as Safe, Healthy, and Energy Efficient," is the title of the piece.

Santra, speaking to The Pilot March 22, said she hopes her doodle will inspire people to "think about what they're doing to hurt the earth" and get them to "actually recycle and help reuse."

"You're using plastic bags to get groceries? No, get your own bags," she said.

Santra, who 11 years old, said she has been drawing since she was 3, starting first with crayons before moving onto oil pastels and watercolor, and eventually learning how to use acrylics.

She gathered inspiration for her piece by simply thinking about "everything around me."

"People are making wars, and that makes me really sad. And also there's global warming, which I want to help fix... I want to reduce the amount of greenhouse gases, so I got inspired by that," she said.

"I also wanted to help fix the mistakes from the past" and help reduce pollution, Santra continued.

She said it took her two or three weeks to solidify the idea for her doodle, but when "I made up my mind I started drawing it on paper, and once it looked okay to me then I did it on canvas."

Now Santra is waiting until March 31, when four national finalists and one winner of the competition will be revealed. Among the prizes the national winner receives is an Android tablet, a Google Chromebook, a trip to the Google headquarters in California, a $50,000 donation to a school or a non-profit of his or her choice, and a $30,000 scholarship.

The winner will also have his or her doodle featured on the U.S. Google homepage for one day.

National finalists receive an Android tablet, a Google Chromebook, a trip to the Google headquarters, and a $5,000 scholarship.

"I'm really happy and excited, and if I win then I'm going to get even more excited," said Santra.

"The most exciting part about that is if you're the actual winner, like the national winner, your painting gets posted on Google for a whole day!" she said.