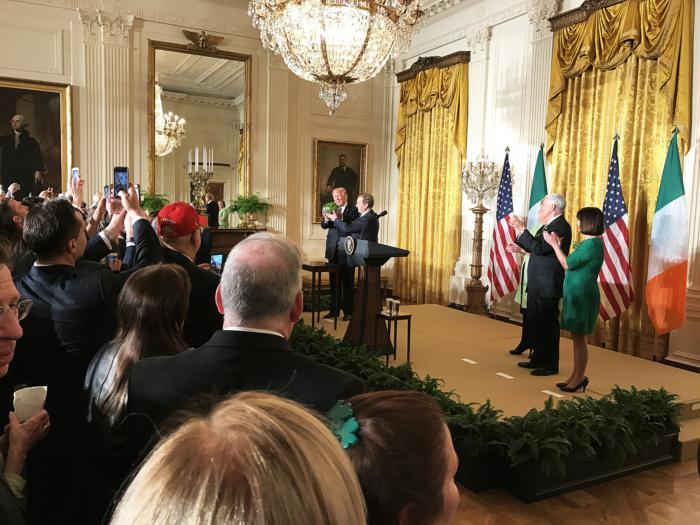 '...I was invited to the White House for the traditional 'handing over of the shamrocks.' The Taoiseach, the Prime Minister of Ireland, Enda Kenny, presented the shamrocks to President Trump in the Oval Office.' Pilot photo/CardinalSeansBlog.org

...As also happened last year when I was in Washington for another CUA meeting, I was invited to the White House for the traditional "handing over of the shamrocks." The Taoiseach, the Prime Minister of Ireland, Enda Kenny, presented the shamrocks to President Trump in the Oval Office.

I also took some pictures of the outside of the White House, including this one of the fountain behind the White House where they had dyed the water green for St. Patrick's Day.

Today (3/17), of course, was St. Patrick's Day and, despite last week's snowstorm that has left sidewalks icy and parking in the South End a bit difficult, we were so pleased that so many hundreds of people were able to join us for our annual St. Patrick's Day Mass at the Cathedral the Holy Cross.

Among the special guests for the Mass were the Vice Consul of Ireland in Boston and Ambassador Flynn and his family.

We were also very pleased to be joined by some special groups, including a delegation from the Archdiocese's Irish Pastoral Center led by Father Dan Finn, and a number of members of the County Meath Civil Defense, who were in Boston to participate in the St. Patrick's Day parade in South Boston.

As always, the Mass was a grand affair, beginning with Irish harp and bagpipe music before the Mass and including the blessing and distribution of shamrocks, which is always very popular with the people.

We are so grateful to Bishop Mark O'Connell who served as our homilist, offering a beautiful reflection on the life of St. Patrick and his example for us as one who was once enslaved, but found freedom in the Lord. He said that, like St. Patrick, the Lord can free us from whatever holds us captive, not just physically but also from such things as addiction, and even fear.

We are also grateful to the students from the Irish Studies program at Catholic Memorial High School, led by teacher Mary Concannon, who joined us once again this year to lead the Prayer of the Faithful in Irish and English.