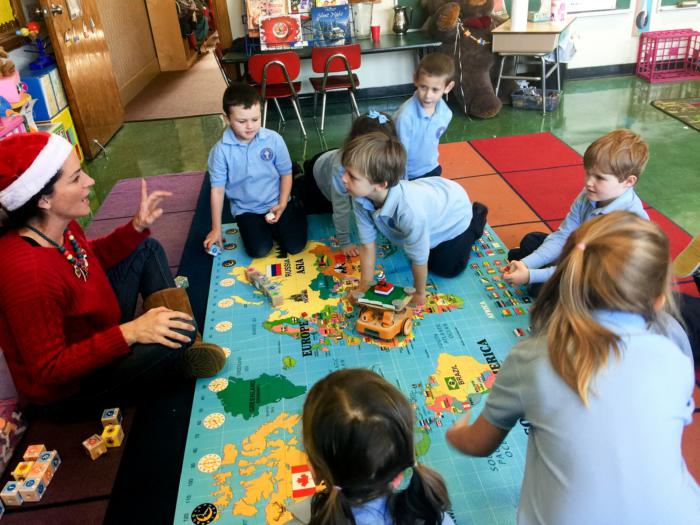 ROCKLAND -- Coding -- the ability to program a computer to perform certain functions -- is becoming an increasingly valuable skill in our world, and at Holy Family School in Rockland, even kindergarteners are being introduced to coding thanks to a little robot by the name of Kibo.

"Kibo is basically a little square vehicle that we can program to move," explained Kindergarten teacher Susan Carr. Beginning in September, the school embarked on the Kindergarten Robotics Initiative. Students were introduced to Kibo and have been taught how to write code to make it move.

"Every month, we have had a project that involves getting Kibo to do a particular task," explained Carr. Most of the time, the project centers around a science or social studies unit the kindergarteners are working on.

Carr cited the example of students' December project, in which Kibo was transformed into Santa's sleigh. Using a large floor map, the children had to program Santa's trip around the world.

"This is what fun and education are all about. While they are watching the trip around the world, the children were learning basic coding skills without even realizing it. They learned directionality, they learned geography, they learned code -- all while having a great time watching Santa's world trip," she said.

"After testing and re-testing, they created a route for Santa and had a lot of fun watching him as he traveled from Boston to London, Venice, Israel and even to Croatia," added principal Joan Cahalane. "Along the way they made adjustments to the route by re-scanning and adding stops that they may have previously forgotten."

Cahalane noted that older students have also been exposed to coding and to Kibo because they serve as mentors to the kindergarteners.

"In this way all students are given the opportunity to learn coding, which helps them think critically and creatively," she said.

Given the success of the Kindergarten Robotics Initiative, the school has purchased more robot kits with the hope of adding coding to the first and second grade program next year.

"What I love about this way of introducing coding is that children are always fascinated by remote control, but with Kibo each child can program it differently every time, which makes it so exciting," said Carr.

"This is the future," she continued. "If these children get started at a young age, they will be very confident as they face more complex challenges. We are trying to make a difference for our children in our ever-changing society."

The Kindergarten Robotics Initiative is only one way the school is trying to make technology more accessible to its students. This year, the school also acquired a 3D printer, and with the help of John Jasper, the school's volunteer technology instructor, "students are being pushed to use their learned skills to solve real-world problems with their own designs," Cahalane said.

The students also are invited to participate in "Tech Tuesday," an extracurricular club led by Jasper.

Tech Tuesday "focuses on the introduction to high-tech as a motivation for students to start the conversation concerning career paths," explained Cahalane. She cited past projects, such as "building a computer from scratch," "drone technology and flight lessons" and "creating a website."

"At Holy Family School, students are exposed to high technology on a regular basis. Along with rigorous academics, faith formation, character development and dedication to serving others, our school is producing respectful, hard-working, well-rounded, tech-savvy young adults," she said.