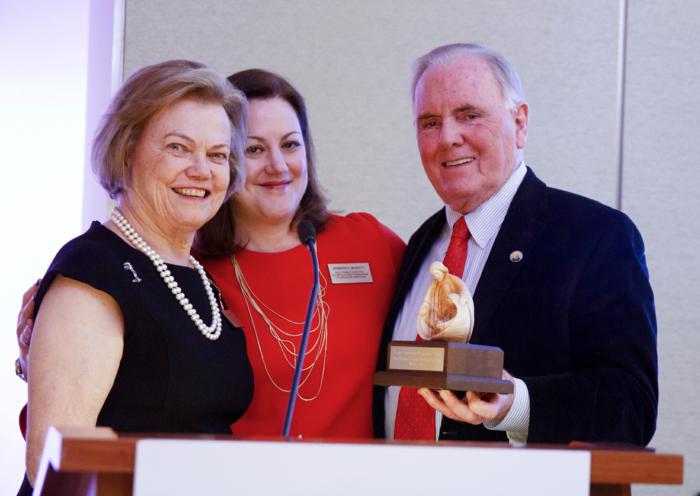 A Catholic teaching hospital, HFH provides maternal care and neonatology services for poor and at-risk mothers, infants, and families. Staff at the hospital deliver upwards of 3,400 babies annually, including more than 350 premature babies.

Only $2.1 million of its $3.7 budget comes from patient payments, while the remaining $1.6 million comes from donors across the globe. The HFH Foundation, since 1997, works to distribute and generate funds for the operating expenses of the hospital.

The Boston reception, held at the Seaport Hotel in Boston's Seaport District, served as a way to generate awareness in the hospital's programs, as well as raise funds.

Through the attendees' support, organizers said, enough donations were raised to save the lives of five premature babies in Palestine.

"If we took what we earned here today, after all expenses, five babies will be born in the neo-natal intensive care unit (NICU) and survive," said Co-Chair of the event and Order of Malta member Thomas Driscoll.

With 24 NICU incubators, he continued, the hospital is "a state of the art facility, and it's dedicated to anybody who comes and has a need. It doesn't matter whether they're Christian, Catholic, Jewish, Protestant, or Muslim... they are all treated fairly."

HFH was originally established in 1888 by the French Daughters of Charity, who ran the hospital until 1985, when political and economic factors forced the institution to close. The hospital was opened again in 1989, when, at the request of St. John Paul II, the Order of Malta took over the operation and management of the facility.

"It's a remarkable institution. What these people do is nothing less than inspirational," said Driscoll of the HFH and HFH Foundation staff.

The keynote speaker for the reception was former Boston Mayor and Ambassador to the Vatican Ray Flynn, who spoke highly of the work the Order of Malta does for the hospital.

"The more I learned, the more I studied about the hospital, the Holy Family Hospital of Bethlehem, the more I became enamored at this extraordinary history -- delivering life, peace and hope in the Holy Land," he said.

"So, my fondest respects, really, for the Knights of Malta for all that you do and all that you reach out to support people, the most impoverished and the most neglected people in the world today," he added.

Continuing, Flynn commended the Order, saying that "by your presence, by your contributions, by your commitment, you are determined to turn things around."

He called to action those in attendance, urging them to "fight for what you believe in" and promote the Catholic faith, adding that doing "what you believe that Christ would want you to do" is "how you're going to get to heaven."

He held up the Order of Malta as an organization that does do Christ's work.

"When I hear the mission of the Knights of Malta and what you're doing and how you're standing up for poor, pregnant women at the Holy Family Hospital in Bethlehem, I know there is a special place in heaven for all of you," he said.

Following his talk, Flynn was presented a Holy Family statue made of olive wood from Bethlehem by the HFH Foundation.

Also given by the foundation was its 2017 Star of Bethlehem award, which was presented to Driscoll. The foundation awards it to "an individual who exhibits not only strong levels of Christianity and support for their community, but also supports our community, our family, in the Holy Land," said HFH Foundation's McNulty.

McNulty, who became director of the foundation in October 2016, said she visited the hospital for the first time a month ago. Seeing the conflicts that have swelled in surrounding areas, she said "knowing that the hospital is just this one beacon of hope is spectacular."

"I'm just very grateful I can be part of something that's so beautiful, so positive, and so much part of our Christianity," she said.

Speaking following the event, Damien DeVasto, the Order of Malta's Boston Area Chair, noted the positive work of the hospital.

"Holy Family Hospital is a wellspring of hope in an area of such conflict," he said.

"The hospital reinforces our call as Catholics and our mission as an order to give Christ's love to all who call out for it."

"It was a great evening to come together with our conferees from Sepulchre and hear Ambassador Flynn articulate the caring spirit and great strengths of our faith," said DeVasto.