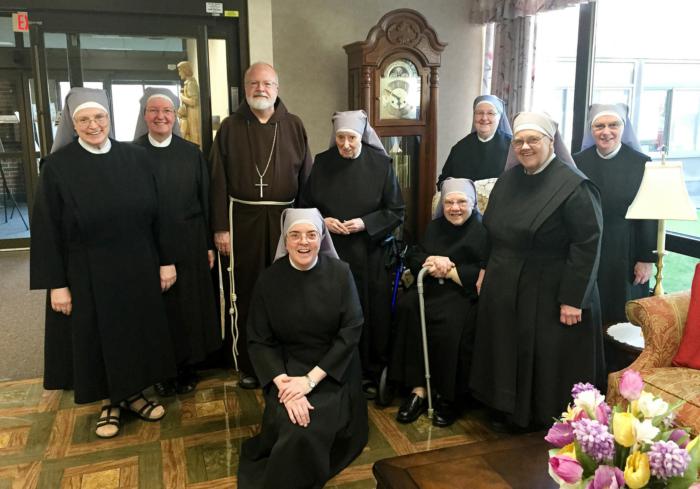 Cardinal O'Malley is pictured with the Little Sisters of the Poor in Somerville in 2016. Pilot file photo

The Medical Missionaries of Mary

On many weekends two Little Sisters of the Poor are seen at local parishes, greeting parishioners and speaking about our mission of caring for the needy elderly. Since 1870 we are privileged to serve in the greater Boston area; first in Roxbury, then in Charlestown for a very brief period, and in Somerville since 1889. The Roxbury and Somerville homes were combined into one new building in Somerville due to the increased safety requirements of the 1970s. The new home went up behind the original one on Highland Avenue and Jeanne Jugan Residence opened its doors in 1978.

If, as St. Paul tells us, "you are the temple of God," then the one sitting to your right or left is also the temple of God. But what does that mean for you and me? Let me illustrate with a few traits found in the life of St. Jeanne Jugan, the foundress of the Little Sisters of the Poor.

Born into a devout family towards the end of the French Revolution in Brittany, France, Jeanne knew poverty and loss from an early age. Her father, a fisherman, never returned from a fishing expedition. Jeanne helped at home and was taught her faith by her mother and pious women of the town. As a young woman, she received a marriage proposal and initially asked the suitor to wait. During that time Jeanne attended a mission preached in the town and when the suitor returned, she found she could not accept his offer. "God wants me for himself, for a work not yet founded," she responded.

Looking at her experience in the light of today with so many young people having a difficult time discerning a life's path: marriage, single life, priesthood and consecrated life -- so many options. Jeanne was also uncertain of her path. As she discerned, she deepened her spiritual life and served the poor of the area as a nurse and domestic. It wasn't until she was forty-seven that God's grace would reveal the path to choose.

Jeanne roomed with a friend in a simple and sparsely furnished second floor dwelling. Among the poor she nursed was Anne. Having lost her sole means of assistance due to her sister's illness and hospitalization, Anne was alone. Jeanne knew this and with her roommate's consent she invited Anne to move in. Wrapped in a warm blanket, lifted onto her shoulder, Jeanne carried her precious friend home and laid her in bed. From that day forward, Jeanne would sleep in the attic. But how were they to survive, those three poor women? When questioned, Anne shared the names of those who gave her a bit of food. No longer would Anne have to beg for her needs; it was Jeanne's turn. Jeanne knew it was she who would beg for the needs of not just Anne, but the many other women and men that would soon seek her aide. In doing so, she was also introduced to young women desiring to be of service, future Little Sisters. This, in brief, is the essence of our life as Little Sisters of the Poor.

As did Jeanne, we come "to ask" on behalf of the elderly we are privileged to serve. You follow in the footsteps of the many who give so generously. From the vendors at the produce market in Chelsea and the cutting rooms in the Boston meat market, to the folks in the pew and those who view our website giving pages, each one is special to the Little Sisters and our residents, each one is prayed for on a daily basis!

We ask you: will you join us in praying for vocations? Discerners need your support and encouragement. Will you think of volunteer options with the elderly? You are sure to receive much more than you give! As an incentive, think about doing it on behalf of those elderly who have been your mentors, those who have helped you to become who you are today. Explore volunteer opportunities with the elderly not just at our home in Somerville, but right where you are. Those "golden years" are such for some, but for many, they are not so golden. You can be the light that shines for them as they live this stage of life. And lastly: will you support them financially by supporting the costs of care, staffing and upkeep of our grounds and buildings?

What a privilege it is to serve our elderly brothers and sisters, temples of the living God, just like you!