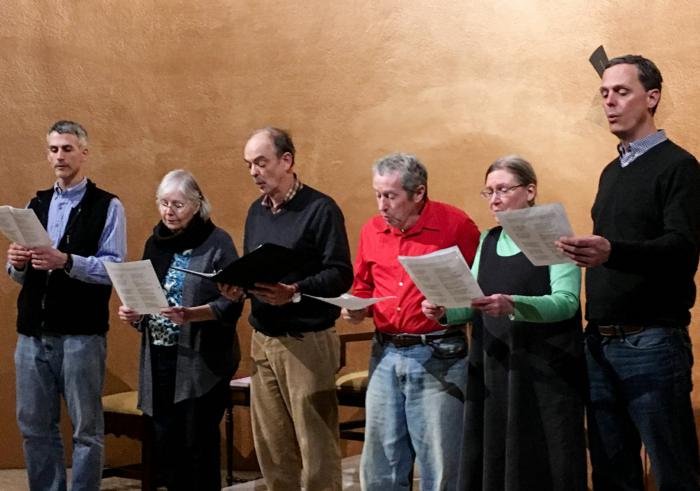 WALTHAM -- Decades ago, it would have been typical to hear Gregorian chant at a Catholic Mass. Today, that's usually not the case; unless, that is, it's a Mass at St. Mary Parish in Waltham.

"Other than the choir school Mass at St. Paul's in Cambridge, the monthly Mass we do at St. Mary's in Waltham is the only Novus Ordo liturgy, to my knowledge, that uses Latin Propers," choir director Randolph Nichols told The Pilot Feb. 21. Propers are the portions of the Mass that change depending on the day and are spoken or sung by the choir or the people.

A professional musician, Nichols has been the director of the choir for several years. For the last seven years the Gregorian chant choir has been singing at the first 8 a.m. Sunday Mass of the month, singing the Introit, Communion, and a post-Communion hymn, all in Latin.

"Of course there are other Propers we could be chanting," said Nichols, but the group only practices once a week on Tuesday nights, and many of the members are not trained musicians. Still, because of his direction and the years of practice, group members are "now very experienced at reading chant and singing it."

"By doing it once a month, they really do it well," he said.

Once a prevalent part of Catholic Masses, use of Gregorian chant began to fade away after the Second Vatican Council. While the Council actually emphasized the importance of Gregorian chant, the use of the vernacular in Masses and the adoption of contemporary music has led to a sharp decrease in chant.

Nichols said there seems to be a misunderstanding, too, about what the Council said, as he occasionally will get asked if the Council did away with Gregorian chant.

Yet, "most people are quite positive, and today every time we sing this, somebody tells me they really look forward to the next chant," he said.

"What chant does that other forms of liturgical music don't do as well is that it centers people; it focuses them on prayer, because chant itself is sung prayer," said Nichols, adding that its purpose is not to entertain.

"It's sort of a visceral type of response... and that's why I think people like it," he continued.

The Gregorian chant choir isn't meant to be a "political statement," he said, but instead, "it's just something because it's beautiful."

Chant is "part of the cultural history and patrimony of the Church and it helps people to pray," he added.

To help parishioners become more familiar with Gregorian Chant a printed program is distributed at Mass explaining the use of chant and providing the verses in Latin along with an English translation.

With the program, "people aren't left out in the cold, they know exactly what's happening," LeBlanc said.

The Gregorian chant choir is just one of eight choirs in the parish, pastor Father Michael Nolan said Feb. 22.

"The parish uses the Church's definition of unity... so we thought (the Gregorian chant choir) would add to the life of the parish," he said.

Nichols noted Father Nolan's support as one of the key reasons the choir has been successful, with another reason being the church's "wonderful acoustics."

The group sings from the loft unamplified, but even so, "the sound goes off the high ceiling and goes through the church. Even though we have a small group, it fills the church," said Nichols.

LeBlanc said members would be happy to expand the choir, both from inside and outside the parish, and "anyone would be welcome to sing with us if they're interested."

"If there are people that would like to join the group, but that might not know how to read Gregorian chant, that's something that we can help them learn."