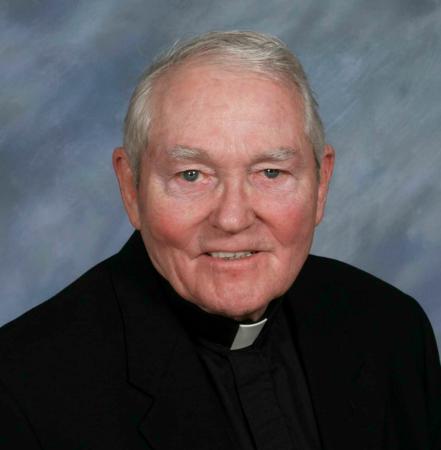 A Roslindale native and one of the three children of the late Frederick and Margaret (Scannell) Coppenrath, Leonard Augustus Coppenrath grew up in Sacred Heart Parish, Roslindale and St. Theresa of Avila Parish in West Roxbury. An alumnus of Roslindale High School from which he was graduated in 1946, he entered St. John's Seminary in preparation for the priesthood.

On Sept. 29, 1953, Archbishop Richard J. Cushing ordained him to the priesthood at Holy Cross Cathedral. He was a member of "second class" of 1953. The second class of 1953 (supposed to have been class of 1954) was ordained early to make room at the seminary, bulging with seminarians most of whom were candidates for the archdiocese.

Except for a two year stint (1965-1967) as a hospital chaplain in Cambridge where he lived in residence at Sacred Heart Rectory, Father Coppenrath served in parishes around the archdiocese either as an assistant, associate or pastor.

He returned to his first assignment, this time as pastor, named by Humberto Cardinal Medeiros in September 1978. He would remain there for more than two decades, being named a senior priest in July 1999. While pastor, he also served as an episcopal vicar in the Boston Region.

In "retirement" Father Coppenrath lived in residence at St. Mary of the Assumption, Brookline; later at Youville House, Cambridge where he was in fact the chaplain and from where he regularly assisted in area parishes. In 2015, he moved to Regina Cleri Residence, Boston.

Pope St. John Paul II named him a member of the papal household as a Prelate of Honor on April 21, 1998.

Following the Funeral Mass, Msgr. Coppenrath was buried in St. Joseph Cemetery, West Roxbury. He is survived by his brother Frederick and several nieces and nephews.