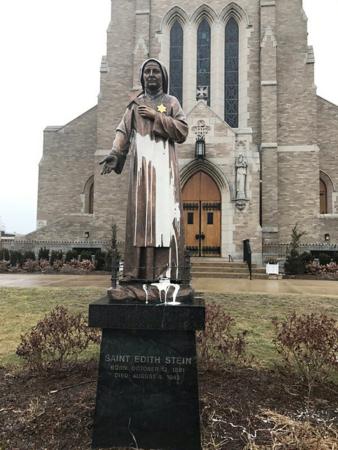 BROCKTON -- Brockton police are investigating the vandalism of four statues outside of St. Edith Stein Church in Brockton after the statues were discovered covered in paint on the morning of Feb. 7.

A copper statue depicting the church's namesake was splattered with white paint, while three concrete statues, depicting Mary, the Sacred Heart of Jesus, and St. Francis of Assisi, were defaced with black spray paint.

"I don't know what was in the mind of the person who did this, but my heart tells me this person is crying out for help, and I hope they can get help," pastor Father Joe Raeke told The Pilot, Jan. 8.

"To do something like this is just so hurtful, it tells me this person is in great pain," he continued.

The statue of the Sacred Heart of Jesus had previously been vandalized and was only recently restored by a local student as part of an Eagle Scout project.

Father Raeke noted that since the incident, a number of people have called to offer support, including another Eagle Scout who has offered to help raise funds for the restoration of the statues.

While he wasn't able to elaborate, citing the ongoing investigation, Father Raeke said police have "someone they think perhaps might be responsible for it."

This is the second act of vandalism St. Edith Stein Church, part of the Catholic Tri-Parishes in Brockton collaborative, has seen in a little over a year. In December 2015, a vandal or vandals hurled a rock through one of the church's stained glass windows.