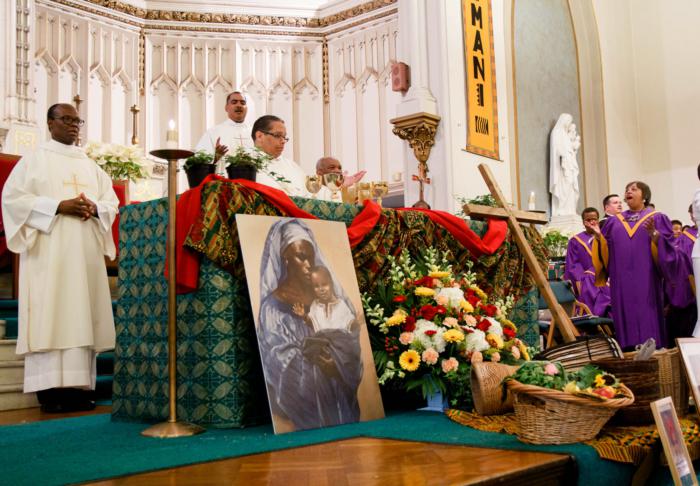 DORCHESTER -- For Augustine Onochie, it wasn't just Father A. Gerard Jordan's homily or the music from the Archdiocese of Boston Black Catholic Choir that made the Feb. 5 Mass at St. Katharine Drexel Parish special. It was also the coming together of different communities.

"The mere fact that we're all brought together to celebrate this Mass, that is awesome," said Onochie, a member of the Nigerian Catholic Community and a parishioner at St. Katharine Drexel.

The Mass commemorating Black History Month was celebrated by Louisiana-born Father Jordan. A Norbertine priest and canon, Father Jordan is a special assistant to the postulator for the canonization of Father Augustus Tolton, the first Catholic priest in the United States publically known to be black when he was ordained.

The day before, Feb. 4, he had given a talk at St. Gregory Parish auditorium in Dorchester that focused on Father Tolton and four other black Catholics being considered for sainthood: Julia Greeley, Pierre Toussaint, Henriette Delille and Mother Mary Lange.

In his homily during the Mass, Father Jordan delivered a message about being true to one's heritage, nationality, and faith.

"We are called to be loyal servants, but the temptation is to pretend sometimes," he said.

"If you are accused of being black and Catholic, American and Christian, you should be put up and found guilty and ready to be put in a prison and die for what you believe and who you are. This is what the early Church did," he said.

The faithful in the early Church, including Jesus' disciples, were sometimes persecuted for their beliefs, something that those in attendance might be able to relate to, said Father Jordan.

Despite the persecution, Father Jordan said to those in attendance, "we got ours, we love that American Dream," and it is now time to reach out to others.

"We first learn how to clothe and feed and love and house in the family, and if you can get that together in your family you are called to come into this house as a larger family, and then if you want to go on sometimes you create houses, like the house of Peter Claver," Father Jordan said.

If, during the coming week, you don't take time to teach "someone about discipleship, your response has been nothing," he said.

The offertory procession, too, was representative of different cultures. In addition to the hosts and the wine, brought to the altar was a cross; a Bible; a candle; an image of the Blessed Mother; an African cloth, representing the diverse cultures of people of African descent; a drum, the means of communication of African ancestors; a "Lead Me, Guide Me" hymnal; fruits and vegetables, representing people from Caribbean Islands; and an image of St. Peter Claver.

At the close of the Mass, a brief ceremony for the Knights of Peter Claver and the Ladies Auxiliary was held that saw St. Katharine Drexel pastor Father Oscar Pratt present the order's new officers and offer a blessing.

"The Order of St. Peter Claver "was founded to reach out to black people in need. It was founded to fill in the gaps where the Church had left us astray," said Father Pratt in his blessing.

"Lord, may all those who turn to them in their need find brothers and sisters who are willing to walk with them in the name of Jesus and to comfort them with the gifts of the Gospel," he said.

During the reception that followed the Mass, Father Jordan spoke about the talk he gave the day before, which was sponsored by the Archdiocese of Boston's Black Catholic Ministry and St. John's Seminary's Institute for the New Evangelization.

He said black Catholics, unlike groups such as the Irish or the French, have relatively few saints to serve as role models, "So, we're trying to push those five people through the canonization process."

Also speaking to The Pilot, Black Catholic Ministries coordinator Lorna DesRoses said that during the talk, "we learned a lot about these people, because many of us don't know about them, and for a cause to be considered, we need to know more about who they are."

"So, it's my thinking these black Catholics aren't just for the Black Catholic community, they're for all of us within the Church, because I think as Catholics, we are called to be counter-cultural, and despite whatever they were going through, they stood steadfast as Catholic and faithful persons," DesRoses added.