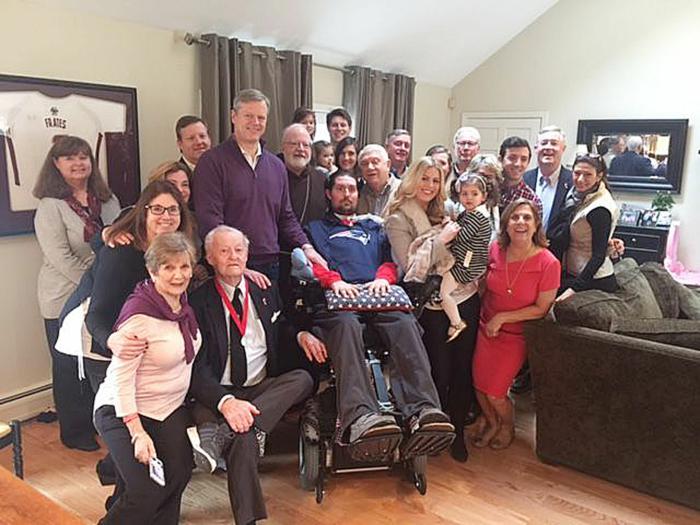 'Sunday (1/22), I went to the Frates home in Beverly to visit Pete Frates and to bestow the Cheverus Award medal to his grandfather Jack Frates...' Pilot photo/CardinalSeansBlog.org

Sunday (1/22), I went to the Frates home in Beverly to visit Pete Frates and to bestow the Cheverus Award medal to his grandfather Jack Frates, a dedicated life-long parishioner at St. John the Evangelist Parish who was unable to be at our celebration at the cathedral last December.

Pete Frates is well known throughout the world as the inspiration for the ice bucket challenge. Pete was the captain of the baseball team at Boston College and went on to play professional baseball in Europe; but at age 27 he was diagnosed with ALS, also known as Lou Gehrig's Disease. A year later, he married Julie and they welcomed their daughter Lucy to their family, but at this stage of his life he is now completely paralyzed.

It was so inspiring to see how Pete's family and friends gather around to care of him. Governor Baker, a close friend of Pete and the family, very kindly joined us for the visit and in congratulating Jack on his Cheverus Award.

While I was there, I administered the anointing of the sick to him. The Gospel reading that I chose was the story of the paralytic being taken to Jesus. It was a very moving experience.

I shared some of Pete's story later in the day when I attended the Assembly for Life sponsored by the Massachusetts Citizens for Life at Faneuil Hall. I told them that this is what the culture of life is about: people facing such health challenges and people coming together to take care of one another. In this family you see how they certainly have. It was so edifying to see the love and the care that he is receiving.

... This morning (1/27) I celebrated Mass for the Boston contingent at Sacred Heart Church, where Father Moises, a fellow Capuchin and dear friend, serves as pastor. There were more than 900 people at the Mass and it was standing room only in the church.

After the Mass, we set out for the March. I was present at the Mall when Vice President Pence and his wife spoke. They both gave very heartfelt and moving testimonies about the sacredness of human life and our obligation to defend life. I was very edified by the stance of the vice president, which was obviously one of a person who is very deeply pro-life. It was not an angry rant but a call for compassion and for understanding, a genuine call for the defense of all human life.

It was a very moving event, this being the first time that a vice president has spoken personally at the March. The tens of thousands of people present at that time, for the program before the March, were very gratified by the vice president's presence.

The numbers of young people joining in throughout the day's events was just tremendous. The March provides a chance for young people to experience their faith at a deeper level, to have the experience of being part of the mission of the Church and to identify with the cause of life, and to be surrounded by other young people who share their convictions and their desire to be faithful disciples of the Catholic Church.