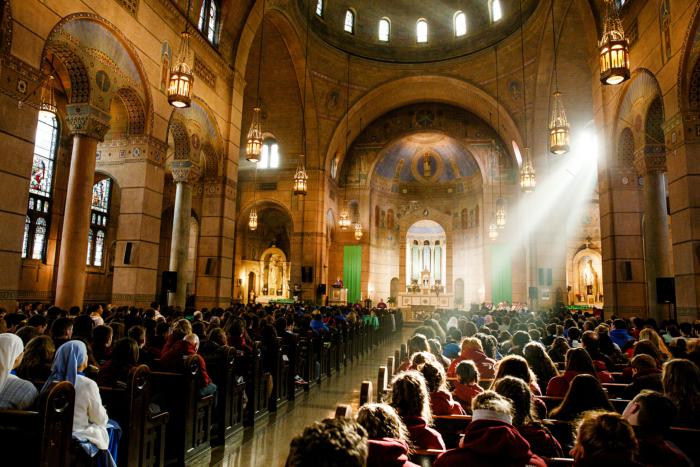 Cardinal Dolan: If sanctuary of the womb is violated, no one is safe

WASHINGTON -- During a Mass at the Shrine of the Sacred Heart in Washington, DC, just hours before the start of the 2017 March for Life, Jan. 27, Cardinal Seán P. O'Malley offered messages of encouragement to Boston pro-life pilgrims.

"My hope and my prayer for all of us here today is that we will know that God has put us here with a purpose," he said to the hundreds of people who had travelled from the greater Boston area to march.

"Choose life, take care of each other, don't be afraid of criticism -- be afraid of failing to embrace your vocation, your purpose, then your life will make a difference," he continued.

The Mass, celebrated annually by Cardinal O'Malley, is meant to unite the various groups travelling with the Archdiocese of Boston before the March of Life begins.

This year, around 1,000 people from the greater Boston area attended the Mass, including youth and young adults with the Office of Lifelong Faith Formation and Parish Support, parish groups with the Hispanic Apostolate, and seminarians from St. John's Seminary, Redemptories Mater Seminary, and Pope St. John XXIII Seminary.

The cardinal began his homily by recalling how several days earlier he administered the anointing of the sick to Pete Frates, a former Boston College baseball captain who was diagnosed in 2012 with ALS, also known as Lou Gehrig's disease.

Now completely paralyzed from the disease, Frates is one of the co-founders of the ALS Ice Bucket Challenge, the viral awareness and fundraising campaign to promote ALS research.

The cardinal said that after Frates was diagnosed with the disease, he went on to marry his wife, Julie, in 2013.

"Talk about a love story. The disease had already been manifest, yet, they had courage to get there and have a child," said Cardinal O'Malley. He added that Frates' brother quit his job to take care of him, and said he is "so impressed" by the way Frates' family cared for him.

The support is important, said the cardinal, especially in a culture that embraces a "survival of the fittest mentality" and advocates for physician-assisted suicide.

"In Massachusetts, there are people who think the best thing we can do for people like Pete are to help them end their lives with poison," he said.

He added that some people might think committing suicide in that way is a compassionate or merciful choice, but said, "mercy and compassion is really taking care of people, letting people take care of us when we are sick or dying."

"We must show the works of mercy in our words, our deeds, and our attitudes. Then we will have the opportunity to open people's eyes to the Gospel of Life," he said, noting that in the Gospel, Jesus' first priority was to care for the sick and suffering.

On abortion, Cardinal O'Malley said that today in the United States alone, 3,000 babies will be aborted.

"When people want to justify abortion, they talk about a child who was conceived because of rape, incest, or a child who will have some congenital disease," he said.

"I assure you, very few of those 3,000 children that will be aborted today are in those categories, and even those children have a right to live and to make a difference," he continued.

That, and physician-assisted suicide, is "why we're here today," said the cardinal, "to say to the whole world that every single life is precious."