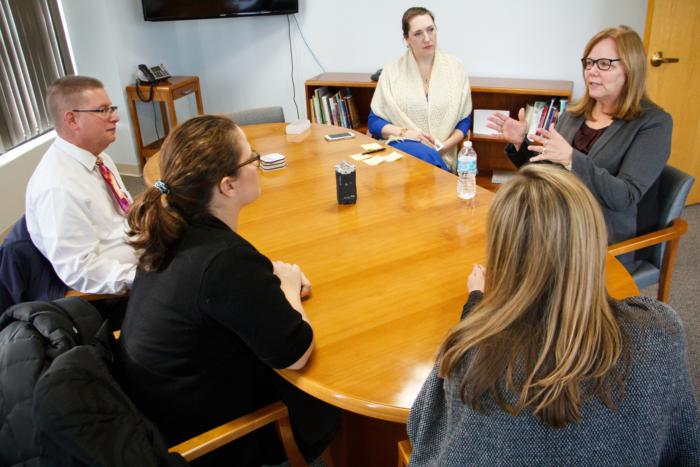 BRAINTREE -- While the Archdiocese of Boston's Catholic Schools Office has long taken advantage of diverse methods of communication to reach the local community, since December 2016 it has added yet another tool to its kit -- a podcast.

"This is a tool of evangelization ...We just have to embrace these new methods of communication," Superintendent for Boston Catholic Schools Kathy Mears told The Pilot, Jan. 17.

The podcast, called "Saints and Scholars On-the-Go," has Mears acting as a sort of host, speaking with parents, educators, and those involved with Catholic education.

It's meant to have a conversational tone, and Mears thinks it could become another way the Catholic Schools Office can connect with parents, something she said she has been trying to do more of.

The first episode, released in December, featured evangelization consultant Amber Ezeani of the Office of Lifelong Faith Formation and Parish Support. She and Mears spoke about ways to celebrate the season of Advent at home.

The next episode, set to be released Jan. 20, features parents and the principal from a Catholic school speaking about the value of Catholic education.

For now, the podcast is produced monthly, but after recording a few more shows, Mears said she and Meghan Stellman, communications coordinator for the Schools Office and producer of the show, will decide if the shows will become more frequent.

"They don't take that long; we're not looking to do hour-long podcasts," said Mears, adding that getting the episodes ready to be uploaded might take longer than actually recording them.

Mears said that although she doesn't have confirmation yet on who she will be speaking to in future episodes, she plans on talking to priests about "the role the pastor plays, or the priest plays, in the Catholic school."

The podcast can be found on the Catholic School Office's website, at csoboston.com, or on iTunes by simply searching "Saints and Scholars."