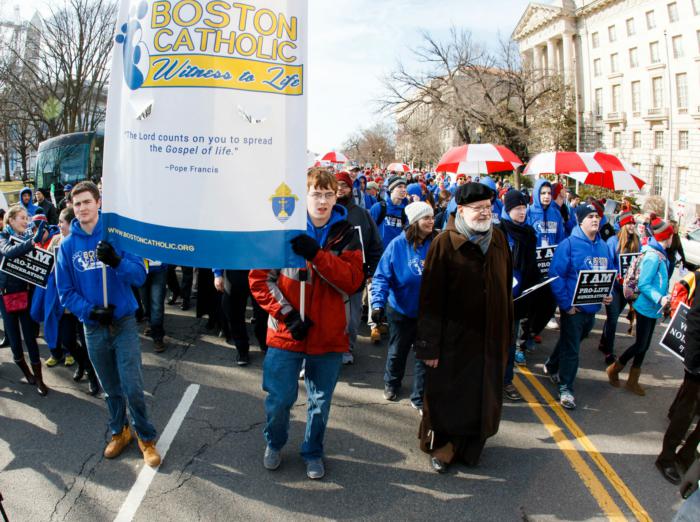 BRAINTREE -- Hundreds of youth and young adults from the Archdiocese of Boston are preparing for the Witness to Life Pilgrimage to attend the 43rd annual March for Life in Washington, D.C., Jan. 27.

Just under 500 young people registered with the Office of Lifelong Faith Formation and Parish Support, housed under the Secretariat for Evangelization and Discipleship, and the archdiocese will be busing many of them to Washington in the early morning of Jan. 26. Separately, five buses of pilgrims from the archdiocese's Hispanic Apostolate are also expected to travel to Washington for the march.

Those registered through the office will travel in one of three "tracks," or groups: a middle school track, a high school track, and a track for families.

Highlights from the itineraries for the middle school and high school tracks include a Life is Very Good Rally at George Mason University on Jan. 26, Mass at the Shrine of the Sacred Heart and the march on Jan. 27, and Mass at the St. Paul Chung Parish in Fairfax, Va. Opportunities for faith sharing, group reflections, and prayer will also be provide throughout the trip.

As is tradition, Mass at the Shrine of the Sacred Heart will be celebrated by Cardinal O'Malley, who will also concelebrate the Vigil Mass for Life held at the Basilica of the National Shrine of the Immaculate Conception the evening before the march.

Before returning arriving home late Jan. 27, the high school and middle school tracks will also visit the Steven F. Udvar-Hazy Center in Chantilly, Virginia. The center is a national air and space museum, a companion museum of the one in Washington, and it will be the first time the Office of Faith Formation and Parish Support will be bringing marchers there.

Father Matt Williams, Director of Faith Formation, said the groups will be going there in light of the Gospel of Life and in light of Pope Francis' 2015 encyclical "Laudato Si," which he says highlights the dignity of the human person.

"We wanted to help the young people see that to be pro-life is not only to be in defense of those who are most vulnerable in society, which is first and foremost... (it is also) to become fully alive, to become the best version of ourselves," he said, speaking to The Pilot Jan. 17.

The museum will hopefully highlight that, he said, as it illuminates "people in American history have used their God-given gifts to achieve greatness."

Father Williams noted that the march itself will be slightly different this year as well, as its starting point has been moved back to the Washington Monument, effectively lengthening the march.

He noted that to make the march as successful as possible, "a steering committee, comprising of different offices and Secretariats within the Pastoral Center," was created to help plan it.

Other efforts, including compiling bundles of items, like scarves, name tags, and prayer cards, for the marchers, and holding training sessions for group leaders, were carried out over the past few weeks.

Jason Deramo, group leader for students traveling from Cardinal Spellman High School in Brockton, told The Pilot Jan. 12 that around 130 students from the school will be attending the March for Life.

"The spirit of Spellman is very Catholic, so the kids are very open to the experience of the trip," said Deramo, who is a Religion Teacher and Campus Minister at the high school.

Deramo said the school had multiple meetings with students to plan for the trip, and the mid-term schedule had been arranged so as not to interfere with the march.

"I love being able to do these trips," he said.

"The experiences that I know they are going to have excite me, so I feel really positive about with it," he added.

Jean Ryan of the Billerica Catholic Community, on the other hand, will be leading one of the smallest groups.

She and another chaperone will be taking two high school students from the Billerica collaborative to Washington, and Ryan couldn't be more excited.

"I'm so very excited for this opportunity. A little wowed that this is happening, but it's happening!" she said, adding that this will be her first time marching.

She said she hopes this trip will be a "good start for something bigger in the future."

"They're a great start for us, because they're really faith-filled young ladies, and I think that can spark something for our community," she said.