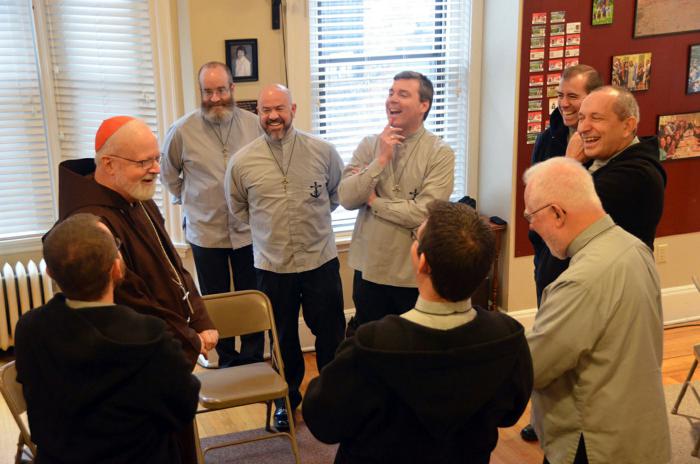 'On New Year's Eve morning, I went to visit the Brotherhood of Hope.' Pilot photo/CardinalSeansBlog.org

At this time I wish to extend our prayers and support to all who were impacted by the shooting at Ft. Lauderdale airport this afternoon; those who lost their lives, those wounded and injured, and their families and loved ones. We also pray for those who witnessed this traumatic event. As always, we are grateful for the bravery of the civil authorities who are the first responders and work every day to protect and defend us.

I hope you all had a happy New Year! As you might imagine, a number of my events last week revolved around New Year's celebrations.

On New Year's Eve morning, I went to visit the Brotherhood of Hope. We celebrated Mass together at the Student Center at Northeastern University, where they are the chaplains. The Brotherhood of Hope is a community that belongs to the Archdiocese of Boston and they were holding their chapter, in which they reelected their general superior, Brother Ken Apuzzo. All the brothers were present at the Mass with the exception of Msgr. Robert Oliver, who had been with us but needed to return to Rome.

We are so grateful for all that the brothers do in their work of evangelization, particularly around campus ministry. One of their priests, Father Paul Helfrich, is the spiritual director at Pope St. John XXIII National Seminary, and of course Msgr. Oliver is the secretary of the Pontifical Commission for the Protection of Minors.

We are very grateful for the wonderful contribution that the brothers make to the life of the Church, both here in Boston and throughout the universal Church.

Celebration with the Haitian Community

On New Year's Day, as I do every year, I gathered with the Haitian community of the archdiocese to celebrate a noontime Mass at the Cathedral the Holy Cross.

Members of the Haitian community provided such wonderful music for the Mass, and the choir of our Lady of Grace Church in Chelsea sang for us.

We were joined at the Mass by a number of the priests and deacons involved in ministry to the Haitian community in the archdiocese.

As part of the celebration, because it is a New Year's celebration, we sang together the Te Deum in Latin, as is done in most places in Europe on New Year's Day as a prayer of Thanksgiving.

Following the Mass, we joined in saying the national anthem of Haiti, because, in addition to being the solemnity of Mary, The Mother of God and New Year's Day, January 1 is also Haitian Independence Day.

Also following the Mass we heard remarks by one of the priests of the Haitian community and by the Haitian consul general in Boston, Marjorie Brunache.

It is always a very moving celebration and an opportunity to bring the Haitian community together at the Cathedral the Holy Cross.