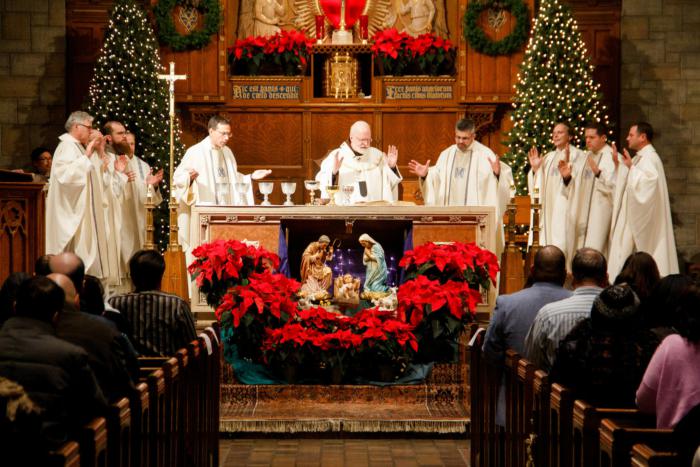 BACK BAY -- It was through prayer, not partying, that Tristan and Yesenia Macdonald chose to usher in 2017.

The young couple, alongside hundreds of others, saw the close of 2016 at St. Clement Eucharistic Shrine in Boston's Back Bay, the site of the Archdiocese of Boston's annual New Year's Eve Prayer Vigil.

Starting the new year in prayer is "really important, especially this coming year, because our world is so divided," said Tristan Macdonald.

The vigil included a period of adoration, benediction, praying of the rosary, and a Mass celebrated by Cardinal Seán P. O'Malley.

Beginning at 10 p.m., the shrine filled quickly, with little space left in the pews as the Mass began at around 11:30 p.m.

In his homily, Cardinal O'Malley spoke about being thankful -- thankful for friends and family, life and faith, and all other blessings that we may have received.

"We want to end this year, and begin the year, thanking God for all of the blessings he has given us," he said.

That includes "blessings in disguise," which the cardinal described as those blessings that might at first seem like curses, but in the end have a positive impact.

"Sometimes it's hard to recognize what the blessings in disguise are, but today we want to thank God for all of those blessings, and trust in his loving providence for us," Cardinal O'Malley said.

He asked that as the new year begins, "let us renew our resolutions, our baptismal promises, to walk by faith and to bring God's light and love into the world."

"Our mission is to make a difference, to build a civilization of love, to defend the Gospel of Life, to help the world experience God's loving mercy expressed in our words and our deeds."

"The journey continues. There will be joys and sorrows, there will be success and failure, but we have a star... that will lead us to the Lord and to our family, and for that we are grateful," the cardinal said.

At a reception following the Mass, St. John the Evangelist in Townsend parishioner Sara Coffey told The Pilot that this was her second time attending the annual prayer vigil.

"The Mass was lovely, it was awesome," she said.

"It's good to ground yourself in Christ and in the Eucharist. To start off the year that way, I feel like it's a good thing," she added.