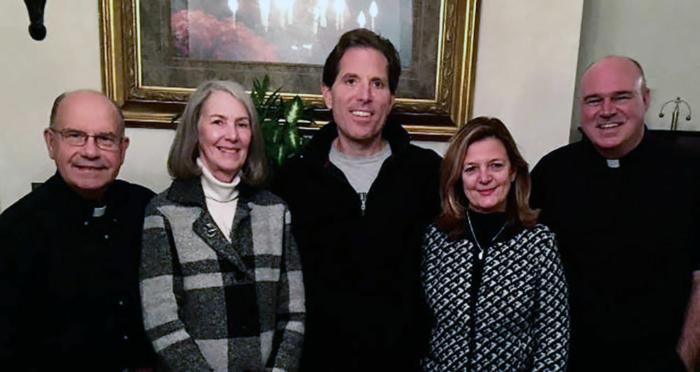 NEWBURYPORT -- Kim Keene, a parishioner of Immaculate Conception Parish in Newburyport, watched her son's friend Corey struggle to combat his substance addiction by attending various programs, none of which seemed to help.

It wasn't until after she and her husband Steven Keene helped fund Corey's placement into a residential 12-step program in a sober living home that results started to become visible.

"Really in a very short time we saw the transformation in him," Kim Keene told The Pilot.

That was three years ago, and since then Corey has been in recovery.

The transformation Keene has seen in Corey over the last few years has been astounding, she said, and it made her and her husband realize that "we had to help other people," she said.

So, the Keenes, along with fellow parishioner Elizabeth McCarthy who had also experienced a loved one dealing with substance abuse, decided to found the Pelican Intervention Fund.

Founded about a year ago, the fund's mission is to raise money to provide funding for residential 12-step substance abuse recovery programs for people who can't afford them, particularly those living within Essex County.

So far, Kim Keene said, the fund has raised tens of thousands of dollars, and has placed seven people into 12-step programs.

Some of those have since completed the programs, and remain in recovery.

"For me, it's a very spiritual journey, and I feel the Holy Spirit is pushing me in this direction to help these young people," commented Keene.

McCarthy said that four of the seven helped by the program -- three men and one woman -- were provided assistance by the fund and placed into programs after being released from jail.

Those who have been assisted following rehabilitation were incarcerated for addiction-related crimes, McCarthy said, and employees in the jails screen them first to ensure a residential 12-step program would be beneficial to them.

McCarthy said that the Pelican Intervention Fund communicates with the Essex County Sheriff's Department, local police departments, hospitals, and spiritual leaders in the area, and receives funding through the donations of countless individuals.

"We feel very blessed by the response of the community," she said.

Immaculate Conception Parish, too, has helped promote the fund.

"What impressed me initially about this was just the fact that here are some parishioners trying to respond to a need that no one else seemed to be attending to," said Father Timothy Harrison, pastor of the Holy Redeemer and Immaculate Conception Collaborative.

"I felt that it was something worth supporting by encouragement," he said.

While the parish hasn't given direct financial support, it has given the fund exposure through a variety of outlets, including publishing information about it in their bulletin and giving organizers and those who have been helped through the fund opportunities to speak at parish events and Masses.

"One of their strongest selling points is the testimony that a number of the young people who have been through these longer terms programs have given," Father Harrison said.

The testimonies are powerful, he said, and they drive home the point that addiction "can happen to anybody."

Father Harrison noted that the Keenes and McCarthy are all "heavily involved in a number of ministries in the Church," including acting as eucharistic ministers and lending support to other outreach groups.

"They're definitely people of prayer and of service and ministry," he said.