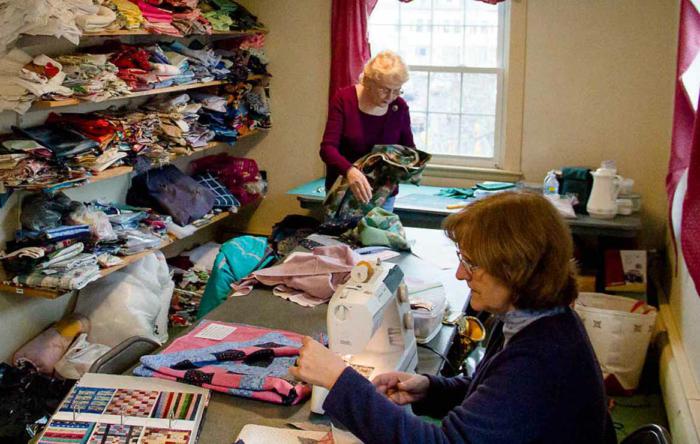 ABINGTON -- Among stacks of cloth and several sewing machines, four members of the quilting ministry of The Light of Christ Catholic Collaborative in Abington and Whitman busily worked on separate quilts, all of which will later be donated to a nursing home.

"It's what God wants us to do," said Rose Perry, who organizes the group.

The ministry began in April of 2010 at St. Bridget Parish in Abington after Perry began working four days a week at her job, which left her Fridays free. Wanting to fill her free time and "do something for the church," she came up the idea for a quilting ministry and advertised it in her parish's bulletin.

About five people responded to the bulletin notice, and the new group held a "planning meeting" to discuss the logistics of setting up the ministry. That meeting eventually led to Father James Mahoney giving the group funds to purchase some sewing equipment.

Perry added that the group also receives batting, the insulation between the top layer of patchwork and the bottom layer of backing, from various companies.

"I wrote to some companies, and they sent some batting... We've got enough supplies for quite a while," she said, looking at shelves overflowing with cloth.

In the ministry's first year, 18 quilts were donated to the Abington Police Department. Officers gave these quilts to people in need that they came in contact with.

"We usually deliver fifteen or so a year" to the residents of the Colony Center for Health and Rehabilitation in Abington, said Perry.

However, she added that since St. Bridget Parish is now part of a collaborative with Holy Ghost Parish in Whitman, the group will likely look for a site in Whitman to donate to, as well.

Perry said that she brought the last batch of quilts in October to the nursing home and said that the quilts are "all about 3 feet by 3 feet... for laps in the wheelchairs."

Meetings are held on the third Friday of every month in the Friary Building of St. Bridget, where Father Mahoney gave the group the use of two rooms. One room acts as storage for the batting, while the other room, filled with tables, chairs, cloth, and sewing equipment, is where the quilts are made.

Recently, the group effectively doubled in size after four new members signed up at a ministry fair held by the collaborative, bringing the total number of quilters to seven. One of the new members, Ruth Wisnaskas, is from Holy Ghost Parish.

Perry noted that the group was "thrilled" to get the new members, and said that both veteran quilters and those who are learning or relearning the craft are in the group and are invited to join.