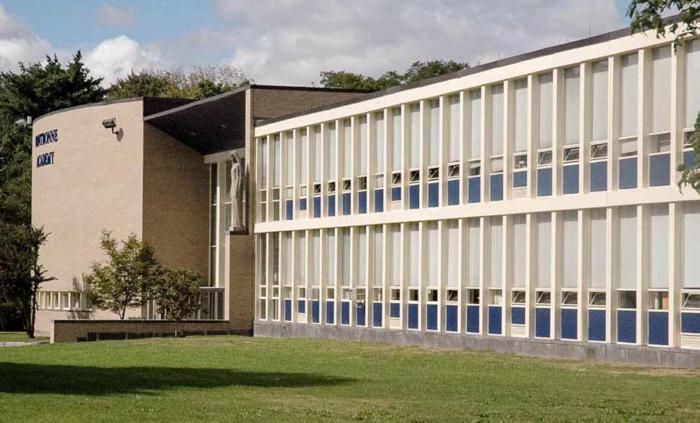 MILTON -- A Massachusetts Superior Court judge ruled Dec. 16 that Fontbonne Academy in Milton discriminated against a man on the basis of his sexual orientation after the school rescinded its offer for the job of food services director upon learning he was in a same-sex marriage.

The case, "Barrett v. Fontbonne Academy," notes that Fontbonne Academy, an all-girls Catholic high school founded by the Sisters of St. Joseph of Boston, had offered Matthew Barret the position in July 2013. Barret accepted the job, but two days after filling out an employee new hire form on which he listed his husband as his emergency contact, the school withdrew its employment offer, stating that his marriage was inconsistent with the teachings of the Catholic Church.

Fontbonne Academy defended the action, arguing that as a Catholic institution it has control of its mission and message, and Barret's homosexual marriage was inconsistent with that message. The school also said that Barret was aware that all employees at the school are asked to further the Catholic message.

The school noted that during Barret's job interview, he had been asked if he would be a "minister of the mission" and model Catholic teachings and principles, and he had said he would.

It was after this that Barret filled out the new employee form, listing Ed Suplee as his emergency contact and husband.

However, the court found the position of food service director does not include "formally presenting the Gospel values or the... teachings of the Catholic Church," and ruled that Fontbonne had discriminated against Barret by rescinding its job offer.

"The undisputed facts establish the employer's motivation with unparalleled clarity. Fontbonne declined to hire a qualified food service employee because he was a spouse in a same-sex marriage," wrote Judge Douglas H. Wilkins in his ruling.

In a statement issued on Dec. 17, GLAD noted that the "next step in the case will be a hearing on damages."

In the same statement, Barret's attorney, Bennett Klein, said that by firing Barret, Fontbonne "came down on the wrong side of the law."

"Religiously-affiliated organizations do not get a free pass to discriminate against gay and lesbian people," said Klein.

Catholic organizations, including The Cardinal Newman Society, which promotes and defends Catholic education, and the Catholic Action League of Massachusetts issued statements that condemned the ruling.

In a Dec. 17 statement, the Catholic Action League of Massachusetts called the decision "a frontal assault on religious freedom."

"Religious freedom consists not merely of the right to worship, but of the right of religious institutions to govern their internal affairs free of state interference... Judge Wilkins's decision would compel Catholic institutions to hire those who reject and despise Catholic teaching, fatally impairing the constitutionally protected right of those institutions to carry on their mission," said Catholic Action League director C.J. Doyle.

Dr. Denise Donohue, deputy director of K-12 education programs for the Cardinal Newman Society, published a statement on the organization's website, Dec. 18, which notes that students need consistent "messages... in areas of ethics and morality" throughout the school day.

"Hiring individuals who are not on mission, whether they are a classroom teacher, librarian or grounds keeper, weakens Cvatholic identity and undermines the mission of the school," she said.

University of Massachusetts Dartmouth School of Law professor Dwight G. Duncan told The Pilot that he found the court's decision to be, "pretty solid, from a strictly legal point of view," but noted Barrett v. Fontbonne Academy seems to be "a case of first impression here in Massachusetts," meaning it is the first case of its kind or one without legal precedent in a particular jurisdiction.

He also noted that the ruling is unlikely to have immediate effects beyond the Commonwealth of Massachusetts.

"My understanding is that the exemption for religious employers from employment discrimination law is broader under federal civil rights law, though. But because the case is based on peculiarities of Massachusetts law, it may not pose a larger threat to religious freedom generally," he said.

"In the abstract, of course, there is no reason why anti-discrimination law should automatically trump the religious freedom of private entities," said Duncan.