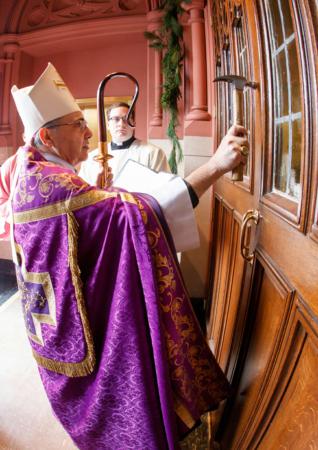 Vicar General of the Archdiocese of Boston Bishop Peter J. Uglietto knocks on the Jubilee Holy Door of the Cathedral of the Holy Cross before a Mass Dec. 13 to celebrate the opening of the holy door for the Year of Mercy. Pilot photo/Gregory L. Tracy

Decree for Year of Mercy indulgence

SOUTH END -- The Holy Door of Mercy was opened in the Cathedral of the Holy Cross, Dec. 13, in a Mass officiated by vicar general Bishop Peter J. Uglietto.

The Mass began in the cathedral's Blessed Sacrament Chapel, where Bishop Uglietto and other clergy members gathered before proceeding to the holy door.

Standing on the outside of the door, the bishop said a prayer and knocked on the door three times with a special hammer, a gesture harkening back to the times when the holy doors of the basilicas of Rome were bricked over between jubilee years and would be broken by the pope with a hammer that would often be made of gold or silver.

Bishop Ugiletto then opened the door and, carrying the Book of Gospels, led the procession of priests, deacons, seminarians and members of groups such as the Order of Malta and the Equestrian Order of the Holy Selpuchre into the cathedral to begin the Mass.

The holy door had been shut since Nov. 29, when Cardinal Seán P. O'Malley sealed it in preparation of the Extraordinary Jubilee Year of Mercy, decreed by Pope Francis.

Pope Francis opened the jubilee holy door of St. Peter's Basilica in Rome on Dec. 8, the Solemnity of the Immaculate Conception. The pope had asked cathedrals around the world to designate special holy doors which were opened on Dec. 13 as Holy Doors of Mercy.

Holy doors have been used since the 15th century as a ritual expression of conversion during jubilee years. Pilgrims and penitents pass through it as a way of shedding the past and moving from sin to grace.

In his homily, Bishop Uglietto spoke of the significance of doors or passageways in the Catholic faith.

"In the Bible, Christian life is often depicted as a passageway, a passage from a former way of life to a new way of living. Leaving the way of godlessness behind and passing into a new life -- a life of Jesus Christ," he said.

"In the very last book of the Bible, Jesus speaks about a door: 'Here I stand knocking at the door. If anyone hears me and opens the door then I will open this house and we will dine.' The door that Jesus is speaking about is the door to our hearts," the bishop continued.

At the end of the Mass, all those present were invited to pass through the Holy Door of Mercy. Organizers estimated that over 1,500 people passed through the door following the Mass.

Craig Gibson was among the members of the Order of Malta attending the Mass, and later told The Pilot that he thought the Mass was both "moving" and "powerful."

He expressed his interest in the Year of Mercy, saying that he has "spent a good deal of time reading about the Year of Mercy," and had read about Pope Francis opening the Holy Door of Mercy in St. Peter's Basilica, Dec. 8.

Gibson said "It was a wonderful opportunity to do that here in Boston, mindful that in our archdiocese these are the only holy doors that have designated throughout the archdiocese for the Year of Mercy."

"It was really a grace-filled occasion to be part of this celebration and kick-off of the Year of Mercy here in Boston," he continued.

The Holy Door of Mercy will remain open until Nov. 20, 2016, and during that time Catholics are invited to make a pilgrimage to the cathedral to receive a plenary indulgence.

With exceptions for those who are sick or confined, those seeking the indulgence must pass through the holy door. In addition, the usual conditions for obtaining an indulgence apply: one must pray for the intentions of the pope, make a sacramental confession and receive Communion as soon as possible.

A single sacramental confession suffices for several plenary indulgences but receiving Communion and praying for the intentions of the Holy Father are required for each indulgence.