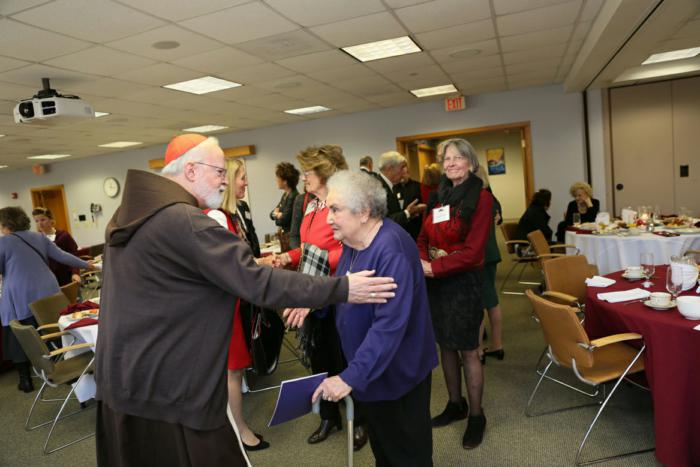 'Sunday morning (12/6), I gathered at the Pastoral Center for a Mass with several of our strongest Catholic Appeal supporters.' Pilot photo/CardinalSeansBlog.org

Last Friday (12/4) afternoon, I met with Tim Phillips of the group, "Beyond Conflict" and his friends Steve and Mary Swig. Tim was very helpful with the Church's participation in the United States' improved relationship with Cuba that was achieved earlier this year. He arranged a meeting with the Swigs to provide them an opportunity to share their thoughts regarding the student debt issue in the U.S. that is having the effect of restricting young people from moving forward in life. It is a particular cause for concern that many are deferring marriage and starting a family because of their high level of student debt. It is our hope that a greater awareness of these issues can lead to developing policies that will help our young people to be making productive contributions to our society.

That evening Msgr. Frank Kelley, pastor of Sacred Heart Parish in Roslindale, hosted an Advent gathering for clergy. It is always enjoyable to gather with fellow priests for socializing and fraternal support. In addition to the presence of priests from various ordination years and assignments, we were all provided a wonderful dinner.

Msgr. Kelley is also a long-standing member of the Board of Directors for the Pine Street Inn and a dedicated supporter of their mission. One of the Inn's social enterprises is Boston Handy Works which, among other activities, produces presentation-quality cutting boards. The workers there made a special board for Pope Francis, which I will deliver during the meetings in Rome this week.

Then, later that day I went to Quincy for the first profession of two sisters of the Daughters of Mary of Nazareth. This is the first class of novices who are making their temporary profession. We are very happy to see the community continue to grow. In all there are about a dozen sisters in the community between the professed, novices, and postulants.

They have settled into their new home in the convent of St. John the Baptist Parish in Quincy, where Father Bob Cullen has been very generous in receiving the sisters.

Sunday morning (12/6), I gathered at the Pastoral Center for a Mass with several of our strongest Catholic Appeal supporters. It was an opportunity to thank some of our major benefactors and also to explain to them what the priorities and plans of the archdiocese are going forward. Following our Mass there was a breakfast, which included a talk by Father Paul Soper and myself followed by a question and answer period.

Sunday afternoon, I celebrated the Memorial Mass for Carolyn Lynch at St. Cecilia Church in Boston. We were very happy to be able to celebrate this Mass with so many members of her family, friends and associates. Carolyn and Peter Lynch, of course, have been some of the greatest supporters of Catholic education in the Archdiocese of Boston. Through their work, they have provided scholarships for literally thousands of needy Catholic school students over the years. But, in addition to that, she was very involved in many other ways in the Church including serving as a religious education teacher and as a Dame of Malta.

On Monday afternoon (12/7) I departed for Rome to attend one of the regular meetings of the Council of Cardinals advising the Holy Father. Our meeting coincided with the beginning of the Year of Mercy on December 8, the Solemnity of the Immaculate Conception, and I was able to enter through the Holy Door of St. Peter's Basilica and pray for the priests and people of Boston. That evening they had a very impressive light show in St. Peter's Square and on the Basilica to mark the beginning of the Year of Mercy.