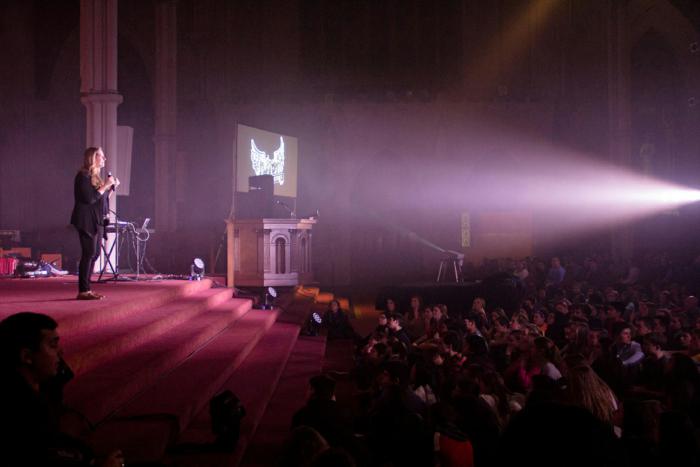 Speaker and singer Jackie Francois addresses the crowd at the Advent LIFT Worship Night at the Cathedral of the Holy Cross, Dec. 4. Pilot photo/Mark Labbe

SOUTH END -- On Friday night, Dec. 4, the Cathedral of the Holy Cross in Boston was alive with bright lights and loud music, all part of the special Advent LIFT Worship Night.

Sponsored by LIFT Ministries, a Catholic ministry based in the Boston area that hosts monthly worship nights geared towards youth and young adults, the event featured music by Jon Niven and his band, a talk by national speaker and singer/songwriter Jackie Francois, and words from Cardinal Seán P. O'Malley.

People crowded the aisles and pews of the cathedral, dancing and holding their hands up in worship as Niven played Christian rock songs. Different colored lights and smoke added to the atmosphere, giving the cathedral a surreal look.

After Niven and his band concluded their set list, Francois went on stage to talk to the many young members of the audience about the feeling of longing. This feeling, she said, can't be filled by any sort of material goods, but can only be filled by God.

"The earlier you figure this out the better... God is the only one who can satisfy this longing and this ache of our hearts," Francois continued in a talk filled with jokes and personal anecdotes.

Francois continued by speaking about the intimacy of receiving the Eucharist, saying "the most intimate you can be with God here on this earth is when you receive Jesus in the Eucharist, and you actually become one flesh, one body with him."

It is through the Eucharist that people realize how much God loves them, she said.

Francois ended the talk by performing her song, "Your Love is Better."

A period of eucharistic adoration was held, and a monstrance was brought out and placed on the altar.

During that time, those in attendance were encouraged to participate in the sacrament of reconciliation in the chapel. A long line of people formed outside the chapel's door, while several clergy members inside spoke with individuals.

The event concluded with words from Cardinal O'Malley, who spoke about Advent and the meaning of Christmas.

"God loves us so much that he wanted to come into our world and become our brother, and that's what we celebrate at Christmastime," he said.

He also reminded audience members about the Extraordinary Jubilee of Mercy.

"This year as we prepare to celebrate Christ's birthday, let us experience God's mercy, in the sacrament of reconciliation and by performing the works of mercy," said the cardinal.

The next LIFT Worship Night will take place on Jan. 12 at Holy Family Parish in Rockland. The speaker will be Frank Connell.