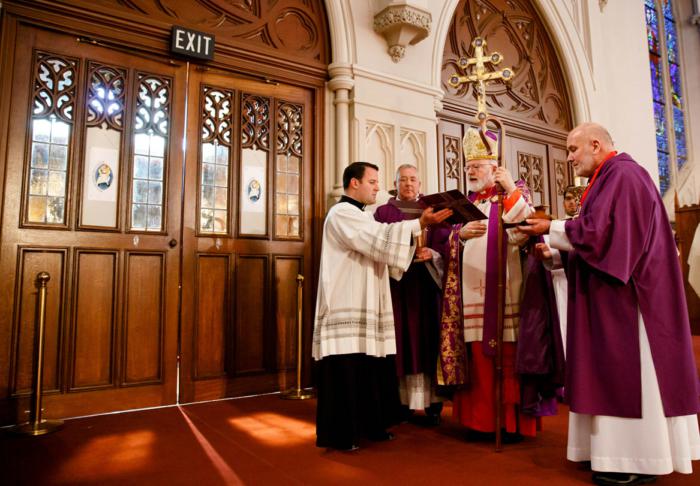 Cardinal O'Malley blesses the Holy Door of Mercy to be opened Dec. 13 for the Year of Mercy declared by Pope Francis. Pilot photo/Gregory L. Tracy

SOUTH END -- Following the conclusion of the Cheverus Awards Vespers service, Nov. 29, Cardinal Seán P. O'Malley sealed a holy door in the Cathedral of the Holy Cross in preparation of the Extraordinary Jubilee Year of Mercy.

"Today, we gather here to bless and seal the holy door that has been designated for the upcoming Jubilee Year of Mercy called for by our Holy Father Pope Francis. We will open it on Dec. 13 along with all the cathedrals in the world," said the cardinal.

When the door is opened on Dec. 13 during an 11:30 a.m. Mass, it will be opened as a Holy Door of Mercy, and will remain open during the Jubilee Year.

Holy doors have been used since the 15th century as a ritual expression of conversion during jubilee years. Pilgrims and penitents pass through it as a way of shedding the past and moving from sin to grace.

After Cardinal O'Malley blessed the door, a cross was hung on it, and a golden cord was placed across it to seal it.

"Let it be a reminder to all of us who pass through it that Jesus is the only way to salvation. Let it serve as a symbol of God's everlasting mercy and his constant invitation to us to return home to him," said Cardinal O'Malley.

The cardinal then invited those at the vespers and their fellow parishioners to make a pilgrimage to the cathedral after the holy door is opened again in December to receive a plenary indulgence. Those seeking the indulgence must pass through the holy door during the Jubilee Year of Mercy, which ends on Nov. 20, 2016, the Solemnity of Christ the King.

In addition, the usual conditions for obtaining an indulgence apply: one must pray for the intentions of the pope, make a sacramental confession and receive Communion as soon as possible.

The Catechism of the Catholic Church, sections 1471-1473, defines an indulgence in this way: "An indulgence is a remission before God of the temporal punishment due to sins whose guilt has already been forgiven, which the faithful Christian who is duly disposed gains under certain prescribed conditions through the action of the Church which, as the minister of redemption, dispenses and applies with authority the treasury of the satisfactions of Christ and the saints.

"'An indulgence is partial or plenary according as it removes either part or all of the temporal punishment due to sin.' The faithful can gain indulgences for themselves or apply them to the dead."

It continues, "To understand this doctrine and practice of the Church, it is necessary to understand that sin has a double consequence. Grave sin deprives us of communion with God and therefore makes us incapable of eternal life, the privation of which is called the 'eternal punishment' of sin. On the other hand every sin, even venial, entails an unhealthy attachment to creatures, which must be purified either here on earth, or after death in the state called Purgatory. This purification frees one from what is called the 'temporal punishment' of sin. These two punishments must not be conceived of as a kind of vengeance inflicted by God from without, but as following from the very nature of sin. A conversion which proceeds from a fervent charity can attain the complete purification of the sinner in such a way that no punishment would remain."