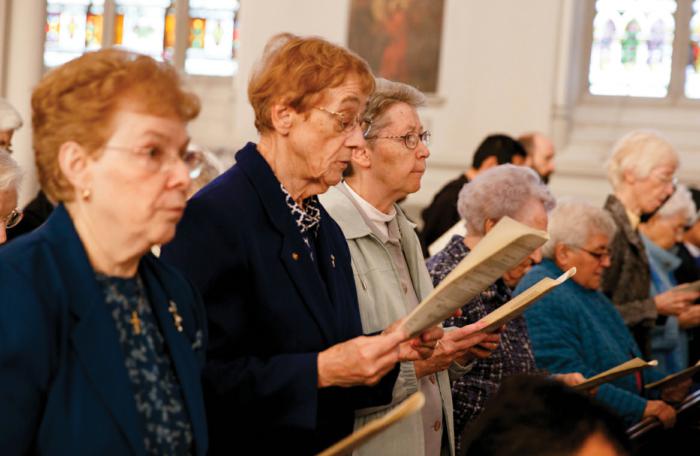 SOUTH END -- Cardinal Seán P. O'Malley began the new liturgical year at the Cathedral of the Holy Cross celebrating the archdiocese's Mass for the Year of Consecrated Life Nov. 29, the First Sunday of Advent.

The Mass, which celebrated the observance of Year of Consecrated Life, began with a liturgical dance by the Dominican Sisters of St. Catherine of Siena and a greeting from Sister Marian Batho, CSJ, the Delegate for Religious of the Archdiocese of Boston.

"As we begin this liturgy, we celebrate the blessing of consecrated life in the Archdiocese of Boston. We thank God especially for the more than 1,900 men and women who have responded generously to God's call,'' said Sister Marian.

"May our celebration today renew all of us in our common commitment to serve the Church and the people of God through our respective charisms wherever we are," she continued.

After Sister Marian's greeting concluded, the entrance procession filed in, and included consecrated men and women who represent some of the many expressions of consecrated life in the Archdiocese of Boston. Those in the procession carried an object or symbol that represented their respective orders.

In his homily, Cardinal Seán O'Malley recalled the historic contributions of those in consecrated life, and spoke on how more modern consecrated men and women have helped shape the country.

"In our own diocese, so many schools hospitals, parishes, and works of mercy have been established because of the generosity and sacrifice of religious women and men," he said.

"Our Catholic school system (and) Catholic hospitals would not exist in our country were it not for the religious communities that founded and sponsored them. So many works of evangelization, both here and in the foreign missions, have been achieved because of members of consecrated life," the cardinal continued.

The cardinal noted that three religious -- St. Damien of Molokai, St. Junipero Serra, Father Eusebio Francisco Kino -- are among the statues depicting important figures in states' histories that are on display in the rotunda of the U.S. Capitol building.

Following the cardinal's homily, consecrated men and women renewed their vows of consecration, and the universal prayer was proclaimed in five languages, English, Spanish, Portuguese, Haitian Creole, and Vietnamese, representing the diversity of religious communitis of the archdiocese.

Following the Mass, a reception was held in the Cathedral High School gymnasium, which neighbors the Cathedral.

At the reception, Sister Marian spoke to The Pilot about the celebration, and noted the importance of introducing more young men and women to the joys of consecrated life.

"The consecrated life is a rich blessing, and we need to all that we can to encourage younger men and women to really be open to hear God's call, and I think the cardinal was saying it's really incumbent on all of us to really spread the good news about consecrated life," she said.

Sister Marian also said she is grateful for the many different religious communities in the archdiocese, not only "the expressions of religious life that have been around for many, many years, but also the new and emerging expressions."