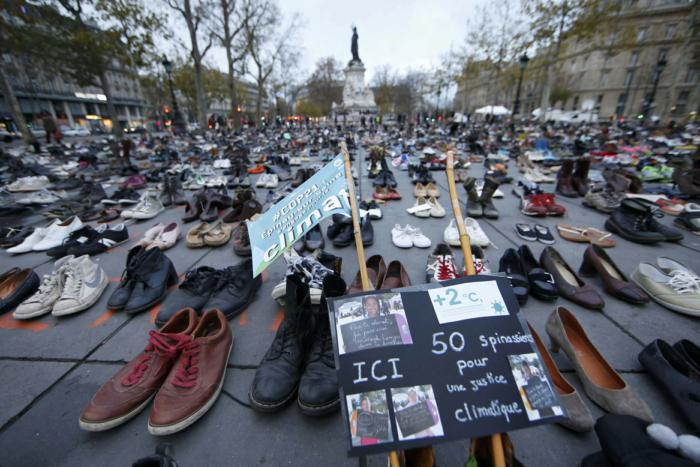 Pairs of shoes are symbolically placed on the Place de la Republique in Paris Nov. 29, ahead of the U.N. climate change conference, known as the COP21 summit, in Paris. CNS photo/Eric Gaillard, Reuters

BRAINTREE -- Cardinal Seán P. O'Malley was among those who added their names to the Catholic Climate Petition, which was presented to world leaders at the COP21 climate summit in Paris Nov. 28.

The petition, sponsored by the group Global Catholic Climate Movement headquartered at St. Anthony Shrine in downtown Boston, was launched in April 2015 and has been endorsed by Pope Francis, Cardinal Tagle, Cardinal Hummes and over 20 other individual bishops around the world. Cardinal O'Malley is the second U.S. bishop to sign the petition, after Cardinal Theodore McCarrick, the former Archbishop of Washington, D.C.

The brief text of the petition states: "Climate change affects everyone, but especially the poor and most vulnerable people among us. Inspired by Pope Francis and the Laudato Si' encyclical, we call on you to drastically cut carbon emissions to keep the global temperature rise below the dangerous 1.5 degrees C threshold, and to aid the world's poorest in coping with climate change impacts."

Christina Leano, Global Campaigns Coordinator with the Global Catholic Climate Movement said, "Cardinal O'Malley's support of the petition is an invitation for all the faithful in Boston and across the United States to follow suit. Given that the United States is one of the greatest contributors to climate change it is imperative that we find ways of protecting our common home in solidarity with the poor and our brothers and sisters who feel the impacts most heavily."

The petition was presented at the Paris Climate Summit as one of several faith-based petitions that urged global leaders to take action against climate change. The combined petitions contained nearly 1.8 million signatures.

Global Catholic Climate Movement also helped sponsor a Global Climate March, Nov. 29. Seeking to send a message to leaders at the climate summit, the march took place in over 2,000 cities worldwide, including Boston, and was estimated to have had over 785,000 participants.