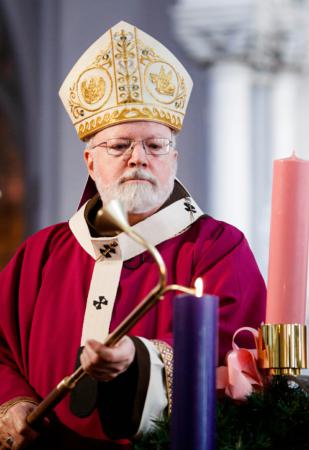 Cardinal O'Malley lights the candle for the First Sunday of Advent on the Advent wreath at the Cathedral of the Holy Cross, Nov. 29. Pilot photo/Gregory L. Tracy

The hustle and bustle of the holiday season has arrived with its music, lights and commercials, but local Catholic families are celebrating the Advent season as they always do -- by preparing spiritually for the coming of Christ. Parents are passing Advent traditions along to their children and teaching them about the true meaning of the season.

Families who spoke with The Pilot said they try to spend some quiet time with God this time of year, sometimes attending daily Mass or adoration. They also do a variety of activities at home that anticipate the celebration of Jesus' birth. Nearly every family said they have an Advent wreath that they light nightly, usually before dinner; they sing, pray and talk about the meaning of the candles.

Some families set up a stocking or creche for Jesus. They fill the stocking with slips of paper that describe their children's good deeds as a gift for Jesus, or they have their children place a piece of hay in the manger for each good deed so that Jesus will have a comfortable place to rest by Christmas. Others have Advent calendars with a daily activity like "say a prayer for your grandmother," "do something kind for a friend" or "wash the dishes" -- small, concrete actions that serve others.

Jeannie Oliver of Corpus Christi Parish in East Sandwich said she hopes the activities her children participate in will bring them outside of themselves and focus more on what they can do for others than what they are going to get for Christmas.

She tries to cultivate a "simple spirit of waiting and preparation" in her home this time of year. The tasks of decorating the home and putting up the Christmas tree are saved for Christmas Eve. "The more children that I have, the better it is to be simple," said Oliver, who has 5 children, ranging in age from 9 years to 22 months old.

Many parents said they deemphasize presents and Santa Claus, with some teaching their children that Santa is a fictional character named after St. Nicholas and using that as an opportunity to teach them about the saint whose feast day falls on Dec. 6.

"We're definitely swimming against the tide when it comes to concentrating on Advent," said Sally Jordan, a Catholic mother of eight from Sandwich. "Materialism is so rampant. It seeps into us whether we like it or not. The only antidote is to keep on serving others."

When her children were younger (her youngest is now 17), Jordan said each child was assigned a "secret Santa" who would leave little presents for them or assist them in small ways by doing things like picking up their socks off the floor. Sometimes the older kids were disappointed when a much younger sibling took on the role since they were less capable of helping out. Jordan used it to teach the lesson that "When someone gives you something, it's a gift, and you say 'thank you,' no matter if it's big or small."

She said Advent is a great time to be thankful and she hopes her children learned that in the story of Christmas -- Mary and Joseph seeking a place to stay with the Christ child -- Christians are called to be the open door the Holy Family found.

Some families use Advent as a time to highlight other stories from the Bible. They may have a Jessie Tree, a tree with ornaments that illustrate stories from the Old Testament. The activity shows the continuity of the faithfulness of God across four thousand years of history.

Many families rely on resources provided online, like the Catholic program Holy Heroes, which provides free children's activities for Advent and other times of year, or the United States Conference of Catholic Bishops' Advent website, www.usccb.org/prayer-and-worship/liturgical-year/advent/. The USCCB site features an electronic Advent calendar that includes the readings of the day as well as suggested prayer intentions and family activities.

Laura VerGow, director of faith formation at St. Mary Parish in Norton, said she provides the children she serves with an Advent calendar with a daily activity that they can do at home. She also sends home prayers for an Advent wreath, and each week they talk with the children about what the colors and candles mean. They are taught that the Catholic Church starts of its liturgical year with anticipation and remembrance.

"I think it's important for them because it's not Christmas, and when they go out in the world -- any place they go -- they're going to see Christmas for the next four weeks, and they need to know there's a reason for waiting," she said. "I love season of Advent, and I try to build up that joy for the season."