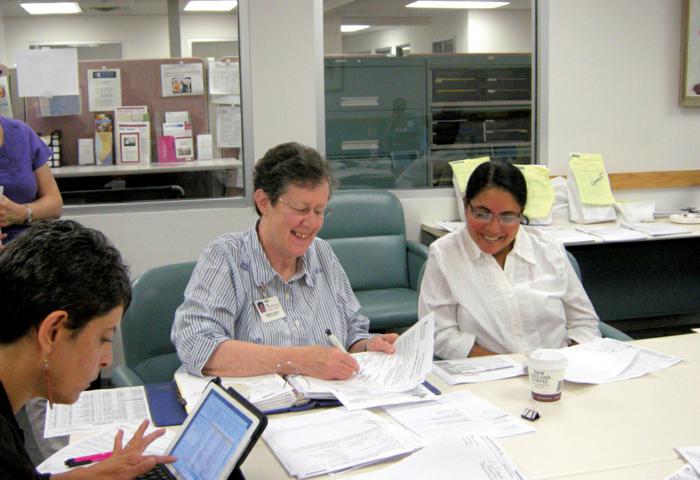 Medical Mission Sisters in every corner of the world celebrated a special milestone in 1925 -- their Community's 90th anniversary. Now numbering 550 members, with an additional 100 women and men Associates, the international Order is in mission on five continents in 18 nations. Committed to being a healing presence among people who are sick, poor or unjustly treated, Medical Mission Sisters follow in the footsteps of their Founder, Austrian-born Doctor Anna Dengel, who often said, "It eats me up," wherever, whenever and however women, children and men are not being treated as fully human beings.

Anna Dengel heard about women and children dying needlessly in pregnancy and childbirth in what today is Pakistan when she was barely 20 years old. Their Muslim custom of purdah meant they could not be cared for by men. With so few women health professionals at the time, thousands suffered and died. Born in Steeg, Austria, and raised in nearby Hall, Anna always had an interest in the missions. After spending a few years teaching in France and then working in her father's vestment business in Austria, she was eager to respond to a special need in the world that only women could answer.

Supported by a generous group of lay women in England, she studied medicine in Ireland then worked in a Catholic hospital in Rawalpindi for four years. The needs were so great that Anna Dengel knew a group of dedicated Catholic women was needed to make a real difference in the lives of their Muslim sisters. She came to the United States in late 1924 to interest others in joining her. Three women, another doctor and two nurses, became the first Medical Mission Sisters when the Community officially began on Sept. 30, 1925, in Washington, DC.

Boston was one of the first places Anna Dengel visited when she came to the United States in 1924. She was received warmly and welcomed into schools and parishes to, as she put it, "Make the Cause Known." Although Medical Mission Sisters never had institutions of their own in the archdiocese, members of the Community have been involved in ministries to persons who are sick and dying, to those who are homeless, to those living with HIV/AIDS, and others in special need, since 1979. That was the year that Sister Rosemary Ryan, MMS, MD, became Director of the Ambulatory Medical Clinic at Faulkner Hospital in Jamaica Plain and then Medical Advisor/Director and Team Member of the Faulkner Hospice Program.

Sisters Marlene Crouse, MMS and Anne Marie Desroches, MMS soon moved to Boston, first working as nurses, then offering special care to persons who were homeless or living with addictions. These two Sisters remain actively involved in volunteer ministries in Boston today. Sister Regina Rowan, MMS who died in 2010, oversaw the social-justice oriented corporate investments of the Medical Mission Sisters from her headquarters in Boston for over 20 years.

Today Medical Mission Sisters in the United States, Mexico, Peru, Venezuela, the United Kingdom, Germany, the Netherlands, Italy, Belgium, Ghana, Kenya, Ethiopia, Uganda, Malawi, Pakistan, India, Indonesia and the Philippines continue to live and work among persons who are on the margins of life. They offer vital health and nutrition education to mothers to ensure healthy pregnancies and deliveries; monitor closely the health and growth of children under five; care for people suffering with HIV/AIDS; work for justice for those who are poor or voiceless; contribute to an ecological way of living and working; are present to women who are imprisoned or trafficked; contribute to and promote the healing arts; and advance holistic attitudes and practices at every stage and age of persons' lives.

Currently a Medical Director for VNA Hospice Care in Boston, Sister Rosemary Ryan, MMS was recently elected to her Community's new leadership team. In 2016 she will be joining Medical Mission Sisters from India, Indonesia, Ghana and Colombia in helping Canonical and Associate members deepen and expand their mission of healing presence. It is an important journey as the Community moves closer to its 100th anniversary in 2025.

Monica M. McGinley is Public Relations and Development Coordinator for the Medical Mission Sisters in North America. She has been a partner in mission for almost 45 years, served on the USCCB Communications Committee, was National President of the Religious Public Relations Council, and in 1990 chaired the international, interfaith Religion Communications Congress (RCC90) held in Nashville, Tennessee. (MonicaMcG@aol.com)