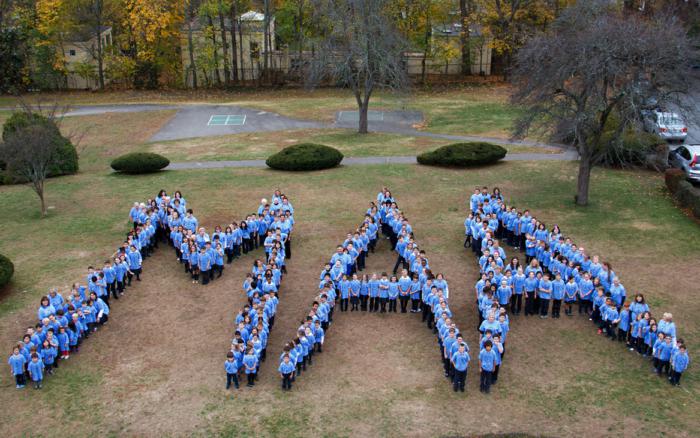 Faculty and staff of Mount Alvernia Academy are pictured on the school's steps Nov. 19, a special day at the school to celebrate their being named a national Blue Ribbon School by the U.S. Dept. of Education. Pilot photo/Mark Labbe

Mount Alvernia Academy, a Catholic school in Chestnut Hill, held a schoolwide celebration on Nov. 19 to commemorate their being named a National Blue Ribbon School.

Created by the U.S. Department of Education, the National Blue Ribbon Schools Program annually recognizes public and private elementary, middle, and high schools based on their overall academic excellence or their progress in closing achievement gaps among student subgroups.

This year, 335 schools nationwide were given the award, with 285 being public schools, and 50 being private schools. Mount Alvernia Academy was the only private school in the Northeast to receive the award this year, and was only one of five schools in Massachusetts.

The school was named a National Blue Ribbon School on Sept. 29, and staff from Mount Alvernia Academy went to Washington, D.C. to receive the award on Nov. 9. While students knew their school had won the award, staff members intentionally kept the day of celebrations a secret.

Early in the school day, each staff member and student was given a blue shirt to wear. They then were led into the gymnasium, where Principal Barbara Plunkett announced there would be no classes that day.

At that announcement, the gymnasium filled with over 300 students erupted into deafening cheers and applause.

After the noise died down, the students' attentions were directed to the front of the gymnasium where the award sat on an easel and listened to their principal offer the morning prayer.

"Today's celebration is an active expression of joy to God, who is good to us. This will strengthen us, and make us better," said Plunkett.

Plunkett read a letter from President Obama addressed to all the 2015 National Blue Ribbons Schools, which thanked educators and students for their hard work. She explained the significance of the award to her students.

"We were the only school in Massachusetts that got it for being an exemplary school, which means scoring the highest in the country in our standardized testing," she said.

The National Blue Ribbon School flag was brought out, and students filed outside to raise it next to the American flag and recite the Pledge of Allegiance. Afterwards, the students were dismissed to play outside, eat a pancake breakfast, and participate in other fun activities.

Speaking with The Pilot, Plunkett said she thinks the school performed well on its standardized testing thanks to "a collaborative effort, vigorous academics, parent support." She noted that the students "work hard."

The walls of Mount Alvernia Academy are lined with student artwork, and Plunkett noted that the importance of art and music classes is valued at the school. However, the school focuses on more fundamental classes as well, taking a modern approach to them by letting students occasionally work on iPads and teaching them about current-day environmental issues in science classes.

Established in 1927, Mount Alvernia Academy is a private, coeducational Catholic school which currently has 329 students enrolled from preschool to grade six. The school is sponsored by the Missionary Franciscan Sisters of the Immaculate Conception.

Franciscan Sister Irene Laurence, a guidance counselor at the school, explained that students participate in the Catholic faith through a number of school run programs, including religion and meditation classes.

"Religion is very important. We start every day with morning prayer as a whole school... We do the rosary together in October and May, and even celebrate Masses," she said.