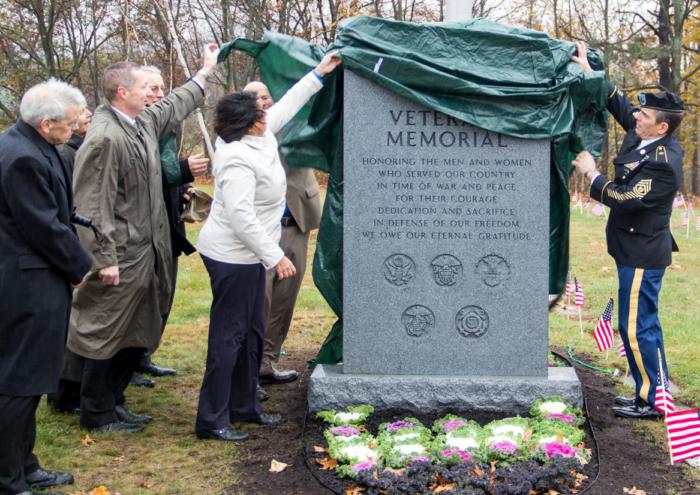 Veterans and civilians alike gathered at St. Mary Cemetery in Salem on Veterans Day, Nov. 11, to witness the unveiling of a new six-foot granite monument honoring those who served.

The message on the monument reads: "Honoring the men and women who served our country in time of war and peace for their courage, dedication, and sacrifice in defense of our freedom. We owe our eternal gratitude."

The unveiling event began with welcoming words from Robert Baker, Director of Family Service at The Catholic Cemetery Association of the Archdiocese of Boston, and an opening prayer from Father John MacInnis, pastor of St. Thomas in Salem and St. John in Peabody.

Salem Mayor Kimberly Driscoll offered a greeting, expressing her gratitude towards those who have served and those still serving.

"[The monument is] a lasting tribute of our outstanding appreciation and thanks for the many sacrifices veterans have made, for the sacrifices their families made," she said.

The Archdiocese of Boston, through its Catholic Cemetery Association, funded the monument as part a series of improvements made to its cemeteries, which includes St. Mary Cemetery in three locations: Salem, Lynn, and Beverly. Restoration of the chapel has begun in the Lynn location, while new roads were laid in the Beverly location.