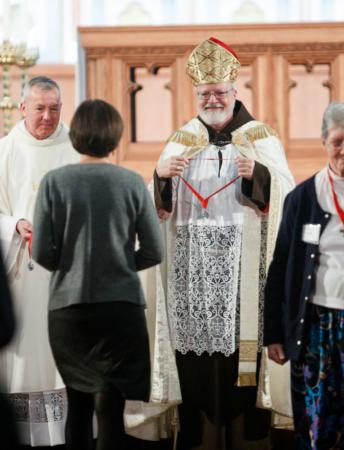 BRAINTREE -- Cardinal Seán P. O'Malley will present 127 Cheverus Award Medals to laypersons, deacons, and religious during a 3 p.m. Vespers service at the Cathedral of the Holy Cross, Nov. 29. Inaugurated in 2008 at the close the archdiocese's bicentennial year, the annual award ceremony recognizes Catholics for their dedicated service to the Church.

Each year, one-third of the parishes of the Archdiocese of Boston are asked to nominate a parishioner for the award. Most recipients are nominated by their pastor and approved by their regional bishop or episcopal vicar and Cardinal O'Malley.

A criterion given to pastors suggests that the nominee be a layperson who has served the parish over an extended period of time and has done so in a quiet, unassuming and, perhaps, unrecognized fashion.

Cardinal O'Malley has previously said that one of the main the purposes of the award is to "put a spotlight on those people whose hidden contributions to the life of the Church often go unnoticed."

The regional bishops and episcopal vicars each year are asked to nominate from their respective regions a religious and a deacon of similar qualifications to be honored with the Cheverus medal. The Central Ministries of the archdiocese also make nominations from among religious, deacons and lay persons who serve on archdiocesan committees or lead key ministries. Some additional recipients are personally selected by Cardinal O'Malley.

During his homily at last year's award ceremony, Cardinal O'Malley noted the importance of the recipients' services to the Church.

"The Archdiocese would come to a screeching halt without the army of staff and volunteers that carry out day after day activities of our parishes and agencies," the cardinal said.

"Your goodness and service are a witness to all and an invitation to live the Gospel phrase stamped on the Cheverus medal -- "Diligamus nos invicem" (Let us love one another)," he continued.

The medal is named for the city's first bishop, Jean-Louis Lefebvre de Cheverus, who led the diocese from 1808 until his return to France in 1824. Bishop Cheverus died in 1836 as the Archbishop of Bordeaux.

The oval-shaped silver medal bears a likeness of Bishop Cheverus based on the Gilbert Stuart portrait. On the reverse side is Bishop Cheverus' coat of arms.

There is no limit to the number of family members and friends who can join the honoree at the cathedral. The presence of the pastor and a delegation of parishioners is encouraged to help underscore the appreciation and gratitude of the parish towards the honoree.

Following the event, a reception will be held in the neighboring Cathedral High School gymnasium, and light refreshments will be served.