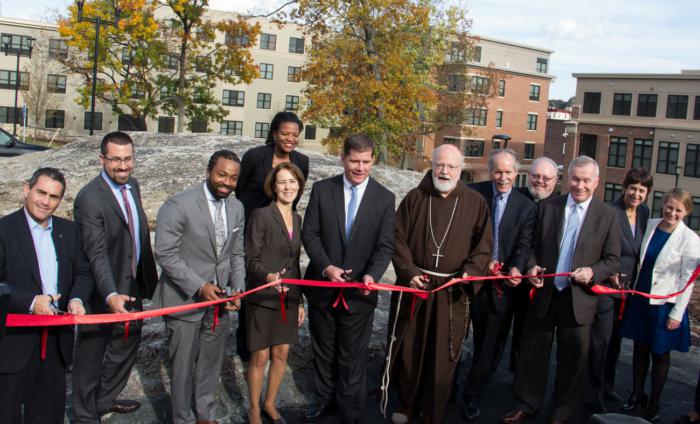 DORCHESTER -- For Christine Wright, the dedication of the Planning Office for Urban Affairs new Uphams Crossing affordable housing development in Dorchester means she can finally have a home to call her own.

"It is truly a blessing from God, and I know I could not be more proud of myself or my daughter for how far we've come," Wright said at the dedication ceremony for the new development, Oct. 29.

Wright said that immediately prior to moving to Uphams Crossing, she stayed at a shelter, and before that she and her daughter "spent many years bouncing around from house to house."

Last month, Wright and her eight-year-old daughter, Gianna, moved into one of the new development's 80 units of permanent affordable housing after spending years without having a place to call her own.

Wright's life has not been an easy one, she explained at the dedication, which also featured remarks by Cardinal Seán P. O'Malley, Boston Mayor Martin J. Walsh, and other officials.

"I had been through a lot -- incarceration, substance abuse, domestic violence, and more, all which have left me feeling very lost and hopeless, and as if my life was spiraling out of control. After seeing the negative effects on my daughter and hearing her wish for her own home, her own bed too many times, I knew I had to make a change," Wright said amid tears.

Wright told those in attendance that 3,500 people applied for the development's 80 available apartments, but "I learned that I was number two on the list" of accepted applications.

At this, the audience members crowded into the event's small pavilion erupted into applause.

Uphams Crossing, located on Uphams Corner in Dorchester, was formerly the site of St. Kevin's Parish until the church closed in 2008. The Archdiocese of Boston's Planning Office for Urban Affairs, in conjunction with the state, local officials, and Bank of America, worked to convert the site to affordable housing. The $36 million development will provide housing to 20 formerly homeless families and to 60 low to moderate-income working families.

The dedication ceremony began with a performance by the children's choir from nearby St. John Paul II Catholic Academy and brief remarks and a prayer delivered by Cardinal O'Malley.

In his address to the gathering, Mayor Walsh explained that although 683 units of affordable housing have been completed in Boston this year and construction on 552 additional units has begun, more work still needs to be accomplished to ensure those who need housing have access to it.

"This is a major step in ensuring that working-class people can continue to take advantage of a vibrant Uphams Corner community, and today is a celebration for a bright future for this neighborhood and for working families," said Mayor Walsh.

Other officials speaking at the dedication included Lisa Alberghini of the Planning Office for Urban Affairs, Robert Gallery of Bank of America, Susan Terrey of the Department of Housing and Community Development, Thomas Gleason of MassHousing, and Judith Jacobson of the Massachusetts Housing Partnership.

In her remarks, Lisa Alberghini, president of the Planning Office for Urban Affairs, recalled the words of Pope Francis to group from Catholic Charities of Washington D.C. during his recent visit to the United States.

"During that visit, he said,'I want to be very clear -- we can find no social or moral justification, no justification whatsoever, for lack of housing.' And the news channels reported continually on Pope Francis' pledge to restore the dignity to those in need. That is what Uphams Crossing ... is all about," Alberghini said.

The dedication concluded with a prayer by Father John J. Ahern and the ribbon cutting ceremony.

Also this week, the Planning Office celebrated the dedication of a development to convert a former Haverhill public school into 12 new units of permanent housing.

On Nov. 2, Cardinal O'Malley joined Haverhill Mayor James Fiorentini, and other officials for the dedication ceremony of a development known as The Apartments at 165 Winter.

Of the 12 new units of permanent affordable housing, three are dedicated to "extremely low-income households," according to the archdiocese.

"The Archdiocese of Boston, through the Planning Office for Urban Affairs, is pleased to have partnered with the Commonwealth of Massachusetts and the City of Haverhill on this important affordable housing development that will benefit many people in need," said Cardinal O'Malley in a statement. ''This project continues the archdiocesan commitment to Haverhill and to the Merrimack Valley."

Mayor Fiorentini noted the community appreciates that the old school will once again be serving the community.

"This wonderful new project is a creative re-use of this old school building, the former Winter Street School," said Mayor Fiorentini. "We are thrilled that this old school building, which served that Lower Acre community for so many years, will be serving the community again, this time as low-income housing. Low-income housing is a critical need in that area. We were pleased to work with Planning Office for Urban Affairs to help meet that need."