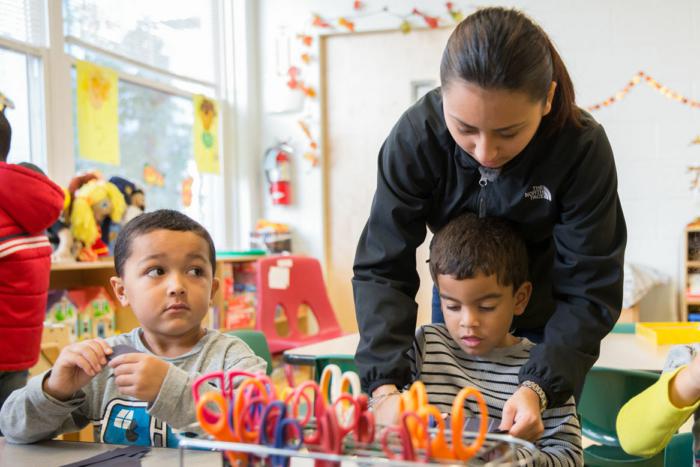 "Our children need us now more than ever to help guide them and to foster programs and environments that enrich their lives," said Rambo. "We are blessed with the extraordinary support of the many people and organizations that see the value in the important work of Catholic Charities and the Lynn Child Care Center. We would like to extend our sincere thanks to the Massachusetts Department of Early Education and Care and CEDAC for their generous support, without which this renovation would not have been possible."

Catholic Charities' Lynn Child Care Center has been providing early education and care as well as out-of-school time services for more than 50 years. The renovated site is currently serving 100 children from Lynn, Nahant, and Saugus, with 95 percent of the children in the program receiving some form of public subsidy.

The 13,000 square feet of space was renovated to provide a more modern and child-friendly atmosphere. The renovations were focused on increasing energy efficiency, improving the building's comfort and functionality for both children and staff including the addition of central air conditioning, and providing better accessibility for persons with disabilities including the addition of an elevator.

"It is well established through research that environments influence the architecture of a child's developing brain, so having program spaces that facilitate positive experiences for children is critical," said Early Education and Care Commissioner Weber. "The facility developments that have been completed through the Early Education and Care and Out-of-School Time Capital Fund grants are helping to modernize spaces, improve the efficiency of systems, and provide better environments for the children that support their optimum growth and learning."

The renovations were made possible through the support of the Rogers Family Fund in memory of former Catholic Charities North Director Gail Kirker Murray, CEDAC and its affiliate, Children's Investment Fund (CIF), and a $750,000 grant from the state's Early Education and Care and Out-of-School Time (EEOST) Capital Fund, as well as Catholic Charities. The renovation was completed by Construction Management and Builders, Inc. with design support from BKA Architects, Inc. and financing from Eastern Bank.

Catholic Charities is one of ten organizations that received capital grant awards totaling $7.45 million to improve or construct new program facilities from the EEOST Capital Grant Fund. The fund was created through a $1.4 billion Housing Bond Bill that passed in November 2013 with the goal of improving the quality of center-based child care facilities.

"There is a growing understanding of the role that well-designed and well-equipped child care facilities play in high quality care and education, " said CEDAC executive director Roger Herzog. "The Lynn Child Care Center is a great example of strengthening communities. We are happy to have supported it through the Early Education and Out of School Time Capital Fund."