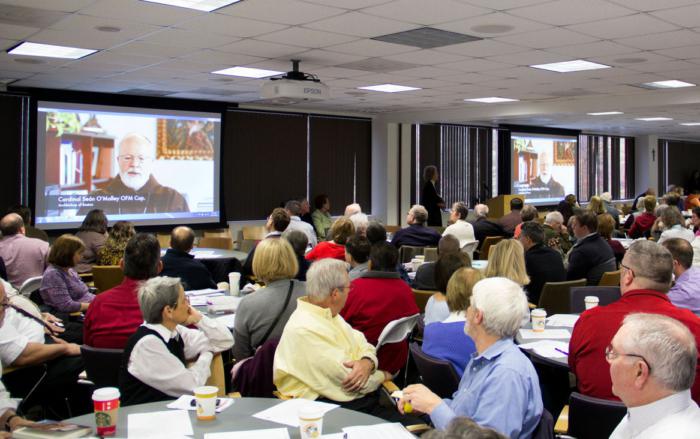 Woo began her talk with a video that featured Pope Francis' announcement of the new encyclical, and then offered an interpretation of the encyclical by Father Michael Perry, the minister general of the Order of Friars Minor. In the video, Father Perry said the encyclical focuses on how all life is connected, and how it is our duty to help those in need and care for the environment.

Woo went on to explain the unique way she thinks of the pope's message.

Woo said that we, as the human race, need to do more when addressing climate change and other environmental issues. One of the ways we can do that, she said, is through economic growth in alternative energy fields. Dr. Woo explained that by investing in clean energy, everyday people can help combat pollution and environmental issues.

The keynote address by Father J. Bryan Hehir, cabinet secretary for Health and Social Services, focused on the other major theme of "Laudato Si'"; immigration.

In his talk, "Role of the Catholic Church in Promoting Gospel Justice for Refugees and Immigrants," Father Hehir said it is important to remember that even after present crises are resolved, we should not put immigration out of our minds.

"In a globalized interdependent world, immigration is a theme, not a passing crisis. Hopefully, we deal with crises, but when there's not a crisis, there is still immigration that needs to be addressed," Father Hehir said.

He continued by saying that at this time, the world doesn't deal with immigration in the way it should be addressed. He explained that in the political arena, there is an "open space" where immigration should sit. In order to truly begin conversations on immigration issues, that space needs to be filled, and politicians need to begin focusing on ways to deal with those issues.

Father Hehir concluded his address noting that "we are an immigrant Church," and it is our responsibility to be hospitable towards immigrants and offer to integrate them into our communities.

Following the keynote addresses, a networking session was held, and audience members were able to interact with each other and a large variety of Catholic vendors.

During the session, Sister Theresa spoke about the importance of evangelization, especially in reference to community-based faith-sharing groups.

"A powerful and proven way -- and many of you have experienced this -- to gather around critical issues of faith are small groups... Small faith-sharing communities need to be certainly fathered around God's word, personal support, but most importantly, they're also calling us to be sent, sent out to our communities and our world to bring God's healing message," Sister Theresa said.

She went on to say that mission is one of the most important aspects of small faith-sharing groups, and, in fact, "mission needs to permeate everything we need in these small groups."

Sister Theresa then allowed audience members to discuss with each other in groups what they could do in their own parishes to address environmental and immigration issues. At the end of the plenary session, Sister Theresa had people share their ideas with the entire audience.

The convocation concluded with Mass in the Pastoral Center chapel celebrated by Father Hehir with music provided by members of the Estudiantina y Danza Troupe.