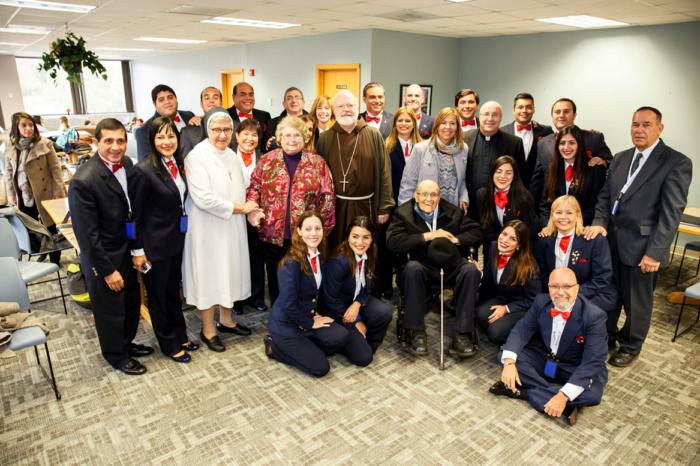 'Then, in the afternoon I was visited by the Betania Choir. The choir is mainly composed of the children and grandchildren and in-laws of Maria Esperanza, the visionary from Betania, Venezuela whose cause for canonization has been introduced.' Pilot photo/CardinalSeansBlog.org

...in the afternoon, I went to St. Mary's in West Quincy for the celebration of the 175th anniversary of their parish. St. Mary's is one of the older parishes in the archdiocese, and it is something of the mother parish for the South Shore. We were joined by a number of people connected to the parish including Quincy Mayor Koch. The parish has such a rich history. I understand it was built for the Irish workers who were working in the stone quarries around Quincy -- this was of course before the Potato Famine and the huge influx of Irish immigrants.

The original church was built for $4,000 in 1840. (They are restoring the current church's bell tower right now, so I told them they should try to get that contractor again!) I also discovered in history of the diocese that former President John Quincy Adams was present at the dedication of the original church.

Sunday morning (10/18), I went to St. Theresa of Avila Parish in West Roxbury for a Mass to celebrate the 500th anniversary of the birth of their patron saint. (Theirs is the only parish in the archdiocese named in honor of St. Theresa.) I was joined for the celebration by Bishop Arthur Kennedy and Bishop Emilio Allue. ...I also spoke a little about the life of St. Theresa. As a doctor of the Church, her writings have been very important in developing the spiritual life of many people. Her theology is a theology that was lived and as I said, saints don't just know about God they know God. St. Theresa has helped many people discover that path of interiority and prayer that helps them to know God.

Tuesday (10/20), we had our annual Peter Lynch Scholars induction Mass at Our Lady Help of Christians Church in Newton. This is the sixth year they have awarded the scholarship. Each Catholic elementary school selects their Lynch scholars based on their academic success and their involvement in the community and other activities. This year, they presented over 180 scholarships.

We offered the Mass for Carolyn Lynch and for her family. Throughout her life, Carolyn made an invaluable contribution making Catholic education available to so many. She will be sorely missed and we look forward to celebrating a Memorial Mass with her family and friends in the very near future. At the end of the Mass, our Superintendent of Schools Kathy Mears and the director of the Catholic Schools Foundation Mike Reardon addressed the young people.

Our Lady Help of Christians is quite a large church and it was almost full, which is just an indication of how much has been accomplished by the Catholic Schools Foundation and the Inner City Scholarship Fund.

Then, in the afternoon I was visited by the Betania Choir. The choir is mainly composed of the children and grandchildren and in-laws of Maria Esperanza, the visionary from Betania, Venezuela whose cause for canonization has been introduced.

Father Richard Clancy accompanied them along with Rose Patek. Rose has made an important contribution to the spiritual life of people in our archdiocese through the center and to the activities that she has supported. They performed a few numbers for us which were very beautiful and touching.

Wednesday night (10/21) was the annual Cathedral High School Adopt-a-Student Foundation banquet at the Seaport Hotel. During the evening they honored the men who established the Adopt-a-Student Foundation: Jim Curvey, John Drew, and John Remondi. They founded the organization 25 years ago, and I think we can safely say that without their efforts the school probably would not exist today. But, not only is it still open, it is thriving -- with modern renovations such as the new gym, new labs and a new roof.