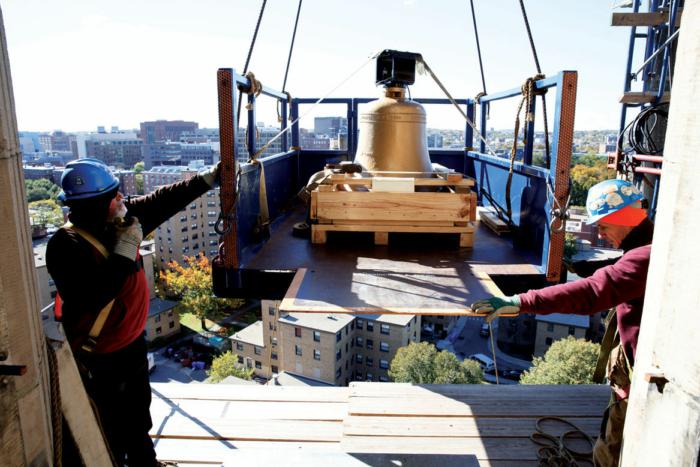 BOSTON -- A crane, forklift and other heavy equipment filled Msgr. Reynolds Way adjacent to Boston's Cathedral of the Holy Cross on the morning of Oct. 23 as workers from Shaughnessy-AmQuip and Folan Waterproofing and Construction Company worked to install the cathedral's new bells.

During the morning, the five bells, each named for a different saint, were hoisted one-by-one 120 feet into the air by crane to reach the cathedral's belfry. Upon reaching their destination, a worker pulled them each into the bell tower, even though some of the bells are thousands of pounds.

The family-owned company has been in existence since 1842 and is the oldest bell manufacturer in the country. It has installed bells in about 10,000 churches across the United States, as well as in a number of different countries.

Santoro explained that, although most church bells are cast out of bronze, the bells installed in the cathedral are steel. Due to their material, the bells had to be shipped to The Verdin Company in Cincinnati for renovations in 2014; six years after they were removed from the now closed Holy Trinity Church in Boston.

The bells were cleaned and rust was removed. After cleaning, the bells were painted to prevent future corrosion. However, he noted that the paint won't have any effect on the quality of their sound.

Santoro explained that electronic strikers were installed in the bells.

Rather than swinging, the bells will hang stationary and be struck from the inside by the strikers which will be controlled from inside the cathedral.

While the installation has gone on without a hitch, Holy Cross Cathedral communications consultant Timothy McGuirk noted that a unique challenge did present itself early on. He explained that the cathedral's bell tower is pitched slightly forward towards Washington Street, which could have produced a difficulty in the installation of the bells.

McGuirk said that the bell tower was meant to reach a height of around 200 feet when it was originally built, but construction had to stop when the tower began to settle, causing the pitch. Bells were never before installed in the cathedral.

The final stage of the installation process began on Oct 26. by Shaughnessy Rigging, The Verdin Company, and John M. Collins Electric.