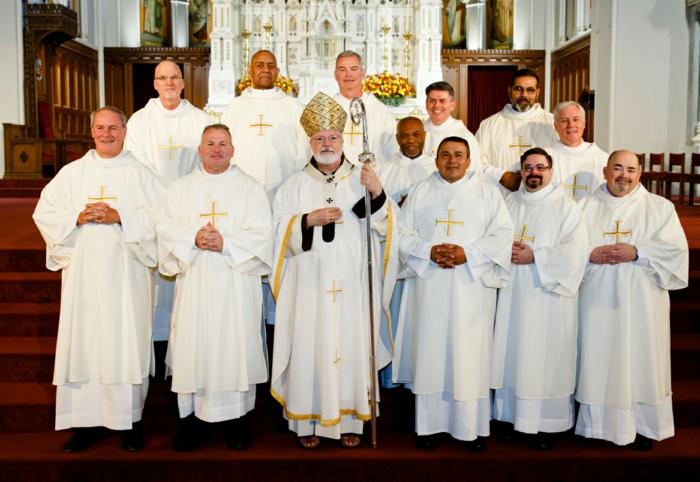 SOUTH END -- As he ordained 12 men to the Order of Permanent Deacon in the Cathedral of the Holy Cross, Oct. 17, Cardinal Seán P. O'Malley spoke to them about them about the ministry of service.

"We will ask all the saints of heaven to intercede for you as you are about to be officially ordained servants, wait staff, service personnel -- servants like Christ who came to serve and not be served," said the cardinal.

In his homily, the cardinal continued by speaking about the original seven deacons chosen by the Apostles, and explained that the role of deacon is not only about service, but it is also about leadership as well.

"The task of waiting on tables is not just about being a maitre d' or a busboy, waiting on tables represents the spirit-filled ministry exemplified in Stephen and Philip, great evangelizes and leaders in the community. Likewise, in the letters to Timothy, the experience in the Church in the ministry of so many holy deacons, we see what the diaconate means," Cardinal O'Malley said.

The deacon, from the Greek word "diakonos," meaning servant or minister, is the first of three ranks of ordained ministry in the Church. Among the many functions they perform in parishes, deacons may preside at baptisms, weddings, and rites of Christian burial, as well as aid the priest at Mass, proclaim the Gospel, and deliver homilies. In addition to a parish assignment, each of the new deacons will also assist in one of the permanent ministries of the archdiocese.

Beginning during the Liturgy of the Word, the candidates were presented to Cardinal O'Malley after the Gospel reading, at which point he elected them for ordination. Then, after the cardinal's homily, the men filed onto the altar, where they approached the cardinal and pledged obedience to him and his successors. They then lay prostrate in front of the altar, as the assembly, invoking the names of saints, prayed for them.

The ordinations were completed after the deacons approached the cardinal, who laid his hands upon their heads in an act that bestows the Holy Spirit and spoke the prayer of consecration. After this, the men's wives presented a stole and a dalmatic -- the vestments of the deacon -- to a priest or a deacon who vested their husbands. The new deacons then each approached the cardinal who presented them with the Book of Gospels, after which the Rite of Ordination was concluded with the fraternal kiss of peace given by Cardinal O'Malley.

After the Mass, the newly ordained deacons joined their families and received congratulations from the throngs of churchgoers in the cathedral.

Deacon Walsh spoke with The Pilot and explained how emotional the ceremony was for him.

"The Holy Spirit just came down and filled me, and filled all of us, I think everyone in the room," he said.

The deacon, who is also a special needs teacher for Lawrence public schools, explained that he became a deacon to serve his community further and in a different way. He plans on continuing his education at the Theological Institute at St. John's Seminary, where he will earn a master's degree in theology.

Also speaking with The Pilot, Deacon Mosley said that he wanted to be ordained because of the example of "the gentleman that wore this dalmatic before me," Deacon John Ego, who recently passed away.

"I just saw some sort of light and I just looked at him and said I want to be just like that," Deacon Mosley explained.

He said that after he retired from the Massachusetts State Police force, where both he and his wife worked, he decided to seriously pursue the ministry of deacon. Deacon Mosley mentioned that before the Mass, he was nervous, but after he put on his mentor's dalmatic, he felt a calm come over him.

"Deacon Jack is with me now because, as I said, this used to be his (dalmatic). The minute I was actually robed, that's when everything was just peaceful."