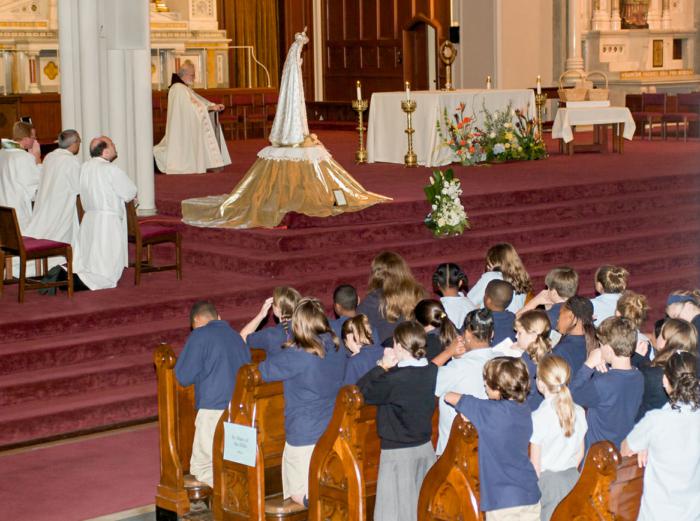 Cardinal O'Malley presides at the first Children's Eucharistic Holy Hour sponsored by World Apostolate of Fatima in Boston in 2006. This year marked the 10th anniversary of the celebration in the archdiocese. Pilot file photo/Christine M. Williams

SOUTH END -- Our Lady appeared to three children in Fatima, Portugal in 1917, and her ability to reach little ones has continued for nearly a century.

Over the past decade, the World Apostolate of Fatima in Boston has hosted thousands of children at the Cathedral of the Holy Cross for a holy hour of adoration. The children pray for peace and learn about the message of Our Lady of Fatima. The most recent Children's Eucharistic Holy Hour was held Oct. 2.

The World Apostolate of Fatima, a public association of the faithful under the Pontifical Council of the Laity, has coordinated the international event for 13 years. All across the world, tens of thousands of children gather annually on the first Friday of October for adoration, song and recitation of the same three prayers. They also pray the World Mission Holy Rosary, which dedicates each decade to a different continent, and the children are encouraged to pray for families everywhere. This year, the closing song was "Let There Be Peace on Earth."

Spiritual director of the World Apostolate of Fatima in Boston, Father Edward Riley, said the children are both awed by the experience and gain a greater appreciation for the miracles at Fatima. He said he has noticed the "tremendous effect" the event has had on his nieces and nephews who have participated.

"They just remember these days," said Father Riley, who is also the director of pastoral ministry at St. John's Seminary in Brighton. "It has touched them. There's no question that they have been touched by the Lord, by Our Lady. They have an encounter."

The local Fatima apostolate invites students in Grades 3, 4 and 5 from all the Catholic elementary schools and homeschooling families in the Archdiocese of Boston to the holy hour. They are about the same age as the three shepherd children of Fatima, who were 7, 9 and 10 at the time of the first apparition. Father Riley said that he tells the children that the Lord chose those three little children rather than adults to spread the message of Fatima, indicating that they are not too young to answer God's call.

Each year there are 350-500 participants in Boston and organizers make the prayer service interactive to keep the children engaged.

Each year, three students dress as the shepherd children -- Lucia, Jacinta and Francisco. In addition, three children from each school are tasked with bringing their school community's prayer intentions to the altar; one carries the written intentions, another a candle and the third a rose. During the recitation of the rosary, a different student leads each Our Father, Hail Mary and Glory Be. All the children follow along with prayers and songs in programs that explain the Fatima story and define terms like "reparation." They can take those programs home along with medals and prayer cards.

Perhaps the most interactive, visual moment comes at the very end when the statue of Our Lady of Fatima is processed out of the church and the children wave handkerchiefs they get to keep. The practice comes from Fatima itself where pilgrims wave white handkerchiefs while a statue of Our Lady is processed back to the chapel at the shrine each Sunday.

In addition to learning about Fatima, the children have the opportunity to experience adoration of the Blessed Sacrament and to see Boston's cathedral, and some years, including this one, they meet Cardinal Seán P. O'Malley.

While Russo has been the principal for 5 years, the school has sent students to the eucharistic holy hour the 10 years it has been held in Boston. In recent years, the entire 5th grade class participated. She said students learn about the larger Catholic community and have the opportunity to pray along with children their age from all over the world.

Judi Scherban, who helps organize the event, said that she hopes the event plants a seed that may develop into a devotion to Our Lady of Fatima. Mary's message continues to be relevant and offer the promise of peace through praying the rosary.

"We have the answer to the world's problems," said Scherban, who heads the Boston Fatima apostolate's scapular making committee.

Father Riley said that the World Apostolate of Fatima is an international organization that works on a parish level. First, a bishop must approve a local chapter and then each pastor approves having representatives from his parish. Members of the apostolate promote the rosary, adoration and lead first Saturday devotions. They make rosaries for Catholic schools and faith formation programs. About 100 parishes in the archdiocese have members, and the Boston group as a whole has an annual meeting.

The Boston apostolate's largest annual event is the holy hour for children, which has a positive effect on both the individual children and the world, according to Father Riley. He said, "I am absolutely convinced that the prayer of these children from year to year to year around the world has been heard by our Lord."