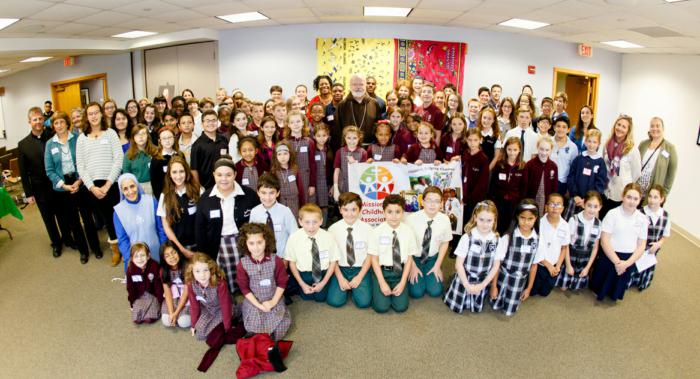 '...yesterday (10/15) I was very happy to celebrate Mass for the Missionary Childhood Association, which is one of the Pontifical Mission Societies in the archdiocese, who were holding their Mission Education Day at the Pastoral Center.' Pilot photo/CardinalSeansBlog.org

Last week, I spent several days in Rome, where we had our second plenary session of the full Pontifical Commission for the Protection of Minors. We have representatives from all of the continents and this is the second time we've come together. It was a very productive meeting. The members spent a lot of time working on their respective projects between the meetings and have also been available to address different bishops' conferences. ...Our function is to help advise the bishops' conferences, encourage them, share resources with them and to make recommendations and we are very gratified that the conferences are beginning to respond in such a positive way. We know that in many parts of the world the whole theme of child protection is something that has not been discussed much in the past, so this is an opportunity to raise consciousness and help the Church throughout the world to work for the safety of children in their own countries.

On Tuesday (10/13), we gathered at the Boston College Club for a fundraiser to benefit the Irish Pontifical Irish College, which was founded back in the 1600s. It is where St. Oliver Plunkett, Blessed Abbott Marmion and many other great Catholic figures have studied. We were very honored to have Cardinal Seán Brady with us for the event and he presented me with a beautiful Father Rupnik mosaic of St. Oliver Plunkett. I was very happy to tell all of our Irish friends that I was actually at the canonization of Oliver Plunkett in 1975. It was a glorious event and I met so many Irish people who had come to Rome for the occasion.

I also mentioned that, in London, I have celebrated Mass for the cloistered nuns at Tyburn. They have relics there, but the amazing thing was to learn how, when Oliver Plunkett was condemned by the British and they marched them down Oxford Street to Tyburn Hill to hang, draw and quarter him, all the Irish in the area came to accompany him, playing bagpipes, throwing flowers and singing hymns. That was the last execution related to the Popish Plot, because the British realized they were becoming quite counterproductive! I also explained to them that recently I had been the papal legate to the celebration of 450th anniversary of St. Augustine, Florida. I told them how, 450 years ago, the King of Spain sent Irish priests to St. Augustine to establish the first parish in what is now the United States, and that part of the anniversary celebration was a dinner to honor the priests from Spain and from Ireland who have worked in America, particularly in Florida.

Finally, yesterday (10/15) I was very happy to celebrate Mass for the Missionary Childhood Association, which is one of the Pontifical Mission Societies in the archdiocese, who were holding their Mission Education Day at the Pastoral Center. The gathering brought together young people from different parishes and Catholic schools who have worked with the association to raise awareness of the missions. One of the important themes of the pontificate of Pope Francis is that we are all called to be missionary disciples. This Mass was held to encourage our young people to embrace this aspect of our vocation, to feel a part of the Church's mission and to be actively engaged in supporting the evangelization efforts of the Church throughout the world.

We are so grateful to Father Rodney Copp, Maureen Heil and all the staff at the Pontifical Mission Societies for their remarkable work in organizing this very important day for our young people.